Non-event of the century so far...? 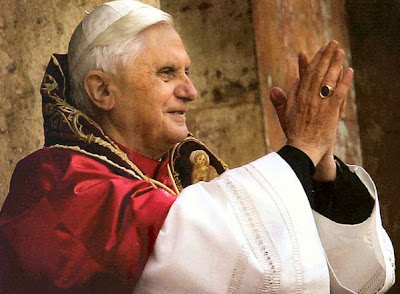 I must be the only English Catholic (how my cousins in Northern Ireland would shudder to hear me say that!) blogger to have been reticent about the upcoming Papal visit to these shores so far. Suffice to say, though, that I have followed with enthusiasm the whole superstar routine, and annoyance the whole ''how very traditional the Papal liturgies are going to be'' propaganda. In fact, so interested was I in the state visit that I had to double check the dates before I began the composition of this post.
I don't know...I am not strictly against the visit of the Pope to this country, and I certainly find the ''Protest the Pope'' nonsense hateful, but I'm not that enthusiastic about it either, and I don't see how the presence of the Bishop of Rome (whose diocese is many hundreds of miles away beyond seas and mountains...!) can do more than kindle enthusiasm about the cult of the Pope's person rather than the Sacred Liturgy. It could (and demonstrably has) also encourage impetuously fierce contempt of the Church, rather like when Pius V said of Elizabeth I: ''Whoever sends her out of this world not only does not sin, but gains merit in the eyes of God.'' How did this help in any way the plight of English Catholics in 16th century England?
Much has been made on the Trad blogs of the Papal Liturgies. On Saturday I flicked through a copy of ''Magnificat'' (they had those at World Youth Day in 2005), the small booklet which gives details of the Papal Liturgies (unless I am mistaken) in my parish sacristy and in all honesty was underwhelmed, though I expected no better. I can't understand why anyone would enjoy queuing up for hours on end to attend a Mass in the New Rite in an open field with appalling music just because the Pope is Celebrant. The whole thing will be fraught with liturgical abuses, in spite of the sensitivities of the Pope - Mass facing the people, although some would argue that this is mitigated by the ''Benedictine Altar arrangement'' - you know, the Pope declares that the compass direction Eastward is now a Crucifix, and if the Queen of Hearts can declare words to mean what she wants them to mean, then yea more the Pope, who is the Vicar of Christ on earth and the dispenser of all Grace, can by his Apostolic authority declare that liturgical abuse is no longer abuse by shifting the compass directions around, etc, etc - so the long miserable saga of Papal manipulation of Liturgy runs on. I must say I find it hilarious that Traditionalists swallow this crap, and would fain liken them to puppets dancing to a great puppet master.
Then there is the use of Latin. As much I as I am in favour of the restoration of the Latin language to the Roman Rite I can't say that it is the most serious issue in the liturgical crisis of the Church. It is not the Latin language that makes the Liturgy traditional - it is the prayer of the Church that does this with the constant witness of Tradition. Latin is only a part of this. But like the Benedictine Altar-arrangement some would say that this mitigates abuse and obscenity. The Holy Father chanting Eucharistic Prayer II to an ''ancient'' tone in Latin must be more edifying and important than the Pope silently praying the traditional Offertory prayers and the Roman Canon. I wonder, were I to do a disservice to the Latin language, which I love, by translating some 1970s hymn into Latin whether people would think the Mass traditional then?
I find great concourse of people irksome in all honesty which is why I hate rush hour on the London Underground, and the Papal events are guaranteed to attract huge crowds of devotees. I am not going to try and imagine the sentiments of fools like Richard Dawkins and the National Secular Society, who are eaten up with ignorance and contempt, but I think I'd be in sympathy with unedified onlookers, of no particular religious persuasion, who would be scandalised or just put off by the witness of the Catholic Church in this country to the Pope. The Papal liturgies promise to be wrong in so many ways, so much want of Tradition and ceremony, at any rate huge Masses with thousands of communicants are a turn off. A better witness to the faith would have been a Papal High Mass in the Old Rite sung in the Birmingham Oratory in the presence of the Oratorian Fathers - at least for the purpose of the beatification of Cardinal Newman. Or even better still, why couldn't Archbishop Nichols have beatified him, and added his name to the local Litany?
So am I happy about the Papal visit? No, and I think for quite reasonable causes too. I think that it will just serve to make a spectacle of the Catholic Church in the eyes of her enemies. O vos omnes qui transitis per viam: attendite et videte si est dolor sicut dolor meus. 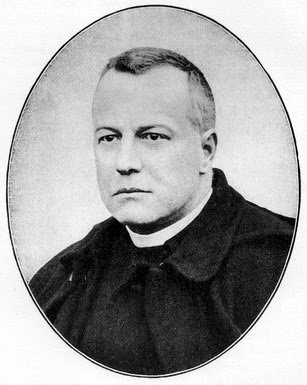 The greatest Church historian of the 20th century, Fr Adrian Fortescue. I wonder what his sentiments would have been had Pius X, a man he cordially disliked, taken it upon himself to visit these shores? I think it behoves us as Catholics to emulate Fortescue's more ''sober'' disposition to the Papacy...
Posted by Patrick Sheridan at 1:07 pm
Email ThisBlogThis!Share to TwitterShare to FacebookShare to Pinterest