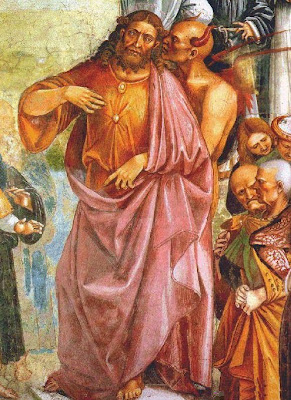 On this subject We judge it Our duty to rectify an attitude with which you are doubtless familiar, Venerable Brethren. We refer to the error and fallacious reasoning of those who have claimed that the sacred liturgy is a kind of proving ground for the truths to be held of faith, meaning by this that the Church is obliged to declare such a doctrine sound when it is found to have produced fruits of piety and sanctity through the sacred rites of the liturgy, and to reject it otherwise. Hence the epigram, "Lex orandi, lex credendi" - the law for prayer is the law for faith.
But this is not what the Church teaches and enjoins. The worship she offers to God, all good and great, is a continuous profession of Catholic faith and a continuous exercise of hope and charity, as Augustine puts it tersely. "God is to be worshipped," he says, "by faith, hope and charity." In the sacred liturgy we profess the Catholic faith explicitly and openly, not only by the celebration of the mysteries, and by offering the holy sacrifice and administering the sacraments, but also by saying or singing the credo or Symbol of the faith - it is indeed the sign and badge, as it were, of the Christian - along with other texts, and likewise by the reading of holy scripture, written under the inspiration of the Holy Ghost. The entire liturgy, therefore, has the Catholic faith for its content, inasmuch as it bears public witness to the faith of the Church.
For this reason, whenever there was question of defining a truth revealed by God, the Sovereign Pontiff and the Councils in their recourse to the "theological sources," as they are called, have not seldom drawn many an argument from this sacred science of the liturgy. For an example in point, Our predecessor of immortal memory, Pius IX, so argued when he proclaimed the Immaculate Conception of the Virgin Mary. Similarly during the discussion of a doubtful or controversial truth, the Church and the Holy Fathers have not failed to look to the age-old and age-honored sacred rites for enlightenment. Hence the well-known and venerable maxim, "Legem credendi lex statuat supplicandi" - let the rule for prayer determine the rule of belief. The sacred liturgy, consequently, does not decide or determine independently and of itself what is of Catholic faith. More properly, since the liturgy is also a profession of eternal truths, and subject, as such, to the supreme teaching authority of the Church, it can supply proofs and testimony, quite clearly, of no little value, towards the determination of a particular point of Christian doctrine. But if one desires to differentiate and describe the relationship between faith and the sacred liturgy in absolute and general terms, it is perfectly correct to say, "Lex credendi legem statuat supplicandi" - let the rule of belief determine the rule of prayer.
Posted by Patrick Sheridan at 12:48 pm
Email ThisBlogThis!Share to TwitterShare to FacebookShare to Pinterest