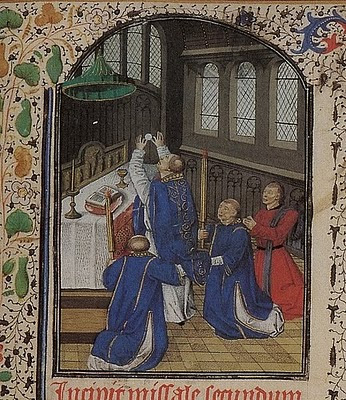 ''Forasmuch as there are certain persons who kneel on the Lord's Day and in the days of Pentecost, therefore, to the intent that all things may be uniformly observed everywhere (in every parish), it seems good to the holy Synod that prayer be rendered unto God standing.'' (Canon XX of the Ecumenical Council of Nicaea, A.D 325).
''We consider it forbidden to pray on bended knees on the Lord's Day.'' (Tertullian, 210).
''There are many other observances in the Church which, though due to Tradition, have acquired the authority of the written Law, as, for instance, the practice of not praying on bended knees on Sunday.'' (St Jerome, 330).
Kneeling on Sundays is hardly new in the West but it's still an aberration. Is this another example of ''development''? Like the Sign of the Cross? In which case one would fain ask what are the use of such ''developments'', and why are they called that? Did St Jerome, among the great Fathers of the Western Church, understand the Lord's Day less than an elderly Catholic woman of the 1930s who knelt in her pew counting beads? I don't think this is exactly the case here, but one in which, like the Sign of the Cross, there has been a gradual loss of tradition, only to be slowly recognised, and codified, by Rome. Like the modern Romish understanding of Canon Law, of course, the most recent ruling is the more authoritative rather than an ancient rule, which has stood the test of time, and will be observed, long after the Catholic Church has crumbled, in the churches of schismatics. It is now a kind of shibboleth. A friend of mine of long standing went to the London Oratory once for their DIY Novus Ordo liturgy (with pretend Subdeacon and everything) and stood (for health reasons) for the Canon Romanus, only to be berated afterwards by an irate Trad who accused him of Modernism. Since kneeling on Sunday is the innovation who, therefore, is the real modernist?
Posted by Patrick Sheridan at 1:38 pm
Email ThisBlogThis!Share to TwitterShare to FacebookShare to Pinterest