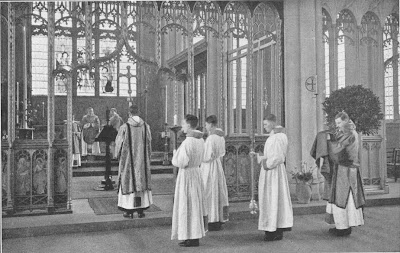 The Sarum Use is one of those things I am fascinated by but know very little about. As a student at Heythrop I often flicked through a copy of the Sarum Missal in the Theology Library (I was particularly fascinated by a rubric in the Sarum Missal regarding the number of Collects - it said that there are never more than seven because Our Lord made no more than seven petitions in the Lord's Prayer) and found much of the text familiar, yet distinct and remote - I can best describe it by comparing it to Merry's experience of the tongue of the Rohirrim:
''But most of the time, especially on this last day, Merry had ridden by himself just behind the king, saying nothing, and trying to understand the slow sonorous speech of Rohan that he heard the men behind him using. It was a language in which there seemed to be many words that he knew, though spoken more richly and strongly than in the Shire, yet he could not piece the words together. At times some Rider would lift up his clear voice in stirring song, and Merry felt his heart leap, though he did not know what it was about.'' (The Lord of the Rings, Book V, Chapter III).
Of course the nuances are not solely limited to language but to custom and ceremonial. The previous post, which I have in fact deleted (I didn't like it) contained Alcuin Club pictures of a Sarum reconstruction at St Cyprian's church at Clarence Gate. Well I say ''Sarum reconstruction'', it was probably not so in fact but Book of Common Prayer liturgy with a few pre-Reformation liturgical precedents (going by what I have gleaned of High Anglicanism as opposed to Anglo-Catholicism) which looked like Sarum. I must say I find this more appealing liturgically than the rage some Anglo-Catholics have for everything Roman - the New Rite, the modern Roman lectionary artificially inserted into a decorous reconstruction of the Old Roman Rite (usually with a single Collect, Secret and Postcommunion prayer), the use of lace cottas, ugly Roman style vestments, the ''big six'', an Altar stuck up against the wall of the Apse with gradines etc. I really really cannot understand this mentality. Why follow contemporary Rome to the letter when Rome has departed from Tradition when you're perfectly all right as you are? Why do away with the traditional surplice and replace it with a silly (and effeminate) looking lace cotta just because this is the Roman custom? Rome is by no means the liturgical sun of Christendom. Who was it that said that not everything Roman is Catholic again? Well it was a Pope of old Rome (St Gregory the Great, one of the finest) who said that things are not to be loved for the sake of a place but places are to be loved for the sake of their good things. Are lace cottas a good thing?
I think it behoves English Catholics to look more to the Medieval English liturgical patrimony than to the silly and untraditional customs of modernist Rome and the entire Counter Reformation period - a period marked by swift decline in the standard of liturgical celebration (it is noteworthy that Urban VIII's revision of the hymnody of the Roman Breviary most likely had private recitation in mind rather than the Office sung in choir - as it ought to be). Take the ''big six'' for example, and gradines; what are they for? What possible use is a gradine, and why are there six candles? In medieval churches there were no more than two candles on the mensa of the Altar (and very seldom a Crucifix) and any additional ones were placed behind, and not on, the Altar - like the arrangement in Salisbury Cathedral. The Islip roll, which includes an illustration of the High Altar of Westminster abbey c.1530, shows the altar entirely unadorned, with lights only on the loft above the altar screen and by the hanging pyx. The prescription of six candles (and a seventh for a bishop) is an entirely Counter Reformation rubric and has no tradition therefore in the English church - why, therefore, do English Catholics bother following this rule? Similarly the placement of the Tabernacle on the High Altar is a modern thing - whatever Michael Davies might have said about how ''important'' it is. It certainly wasn't important to St Bede, who had no Tabernacle (in his time the Sacrament was reserved not in the church itself but in the presbytery, and not seldom the houses of lay people), no Great Elevation at Mass and still managed to believe in the Real Presence. The Rood Loft dominated the medieval church and screened the Quire of the church off from the Nave, so the Rood should provide the crucifix of the church, not a brass one placed at the top of a gradine (and there is no use fussing about when the Altar is therefore ''unadorned'' by a crucifix). Of course there are no more Roods, no more Sarum, no nothing - just boring old Rome, Romish vestments, Romish cottas, Romish candles, Romish everything.
Medieval Liturgy ought to be the yardstick of liturgical orthodoxy and decorum. Baroque liturgy, such as you will find in the London Oratory, by comparison, is just decadent.
Posted by Patrick Sheridan at 1:26 pm
Email ThisBlogThis!Share to TwitterShare to FacebookShare to Pinterest