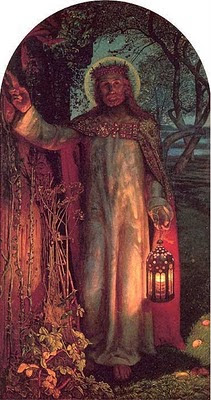 I encourage readers of this blog to read the poem Crist by the Saxon poet Cynewulf, the successor of Caedmon. These words stirred in my hero J.R.R Tolkien something unfathomable and profound, and inspired him to compose (sick with Trench fever (when I first wrote ''trench'' I spelt ''Trent''; a Freudian slip there?) in hospital in 1916) the earliest of the Lost Tales, the Voyage of Earendel, which forms the foundation stone for the legendarium. Even if you care not for Tolkien overmuch, how can you not be moved by this poem? It reminds me of O Oriens, one of the Great Antiphons:
Éalá Éarendel engla beorhtast ofer middangeard monnum sended; ond sóðfæsta sunnan léoma torht ofer tunglas þú tída gehwane of sylfum þé symle inlíhtes!
Hail Earendel, brightest of angels, above the middle-earth sent unto men, and true radiance of the sun, bright above the stars - thou of thy very self illuminest for every season!
One thing has struck me about Medieval authors, which hitherto I had only half-heeded: these men must have been profoundly steeped in the Sacred Liturgy and in the Holy Scriptures and the writings of the Holy Fathers (and the Sacred Liturgy being the proper context of these traditions of the Church) - much more so than many modern Catholics (with one or two exceptions). Crist by Cynewulf is such a work. Cynewulf writes as if he breathes an air of undiluted holiness, as it were, and his poem Crist is steeped in a catholic exuberance scarce to be found in other works. Crist of Cynewulf is, moreover, a link between Tolkien and the Sacred Liturgy. Earendel (which can be interpreted ''radiance of the dawn'') is in deference to St John the Baptist, the herald of Christ's coming. Tolkien became enamoured of this name, a name which encompasses many aspects and facets of Old Testament symbolism about the advent of Our Lord, even as the first dawn to illumine the cold lands of Men. In The Silmarillion, Eärendil the Mariner, the Flammifer of Westernesse, with the holy jewel upon his brow, penetrated the shadows of the wild seas about the Blessed Realm and besought the Valar as the herald of Elves and Men to move them to pity upon their sorrows and travail; and thus was the kingdom of the Dark Lord brought to ruin. How poignant and marvellous a connexion between the Prophet and the Mariner, between Liturgy and literature. 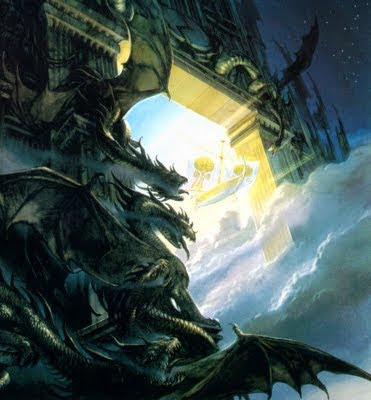 I never cease to be amazed at the genius of this great man. C.S Lewis was a dejected weakling by comparison - a genius (but sadly also a heretic - you only have to read his most horrible work Letters to Malcolm to forever dash the idea that he was an Anglican in sympathy with the Roman Church, a work barbed with side-swipes at the faith) who wasted his time with relativistic apologetics but achieved no real magnum opus. ''Narnia'' and all that is outside the range of my sympathy, I'm afraid. Tolkien's legendarium is, like Cynewulf, steeped in catholic exuberance. This exuberance manifests itself in many ways, such as the preservation of inherited ritual down through the generations (such as the Standing Silence before meat done by the Men of Gondor, which made Frodo feel rustic and untutored), the reverent memory and reverence for noble history and regal ancestry - preserved in books of lore and custom in the House of Elrond, but living still in the land of Lórien - where ''waking memory'' reminds me of the Anamnesis of the Sacred Liturgy, making present the Tradition of the Church both by being faithful to Tradition and by following Christ's ordinances. Tolkien was one of the proto-Traditionalists of the 1960s, like Evelyn Waugh. In the light of his work it is not surprising that Tolkien decried the impetuous mutilation of the Sacred Liturgy done under the auspices of the Popes. The New Rite, for Tolkien, was heart-breakingly that - new.
Well I guess I've long ceased to make sense so I'll cut short here. Do read Crist by Cynewulf.
Posted by Patrick Sheridan at 2:21 pm
Email ThisBlogThis!Share to TwitterShare to FacebookShare to Pinterest