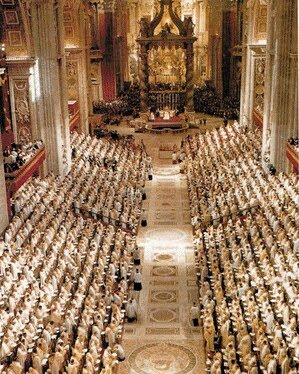 ''I can't work you out,'' quoth a reader.
I'm not surprised. Unless I am quite mistaken there seems to be only one kind of Catholic blogger: the ''traditionalist'' or ''neo-conservative'' kind, all parroting the same lines - how the Tablet subverts Catholic doctrine, complaining about anti-Life legislation, misnaming the Old Rite the ''extraordinary form'' and ''usus antiquior'', not discussing Liturgy enough, Pope Benedict XVI is the greatest man who ever lived etc. Liturgy is far more important than the Tablet, which can say whatever the hell it likes as far as I'm concerned (I don't even read it - but then I don't read any newspapers or magazines). If people believe half the tripe it contains then that's their problem. Although I must say that I marvel at churches who won't sell The Tablet but would gladly advertise for the Latin Mass Society...
Trad bloggers blanch at the so-called ''spirit of Vatican II''...are they that high and mighty? Were I born in 1948 rather than 1988 I think I'd have been caught up in the said euphoria, gladly shaking off the decay and decadence of 19th and 20th century Catholicism (in fact all the ''isms'' of 19th and 20th century Catholicism have been healthy reactions against some pernicious trend in the Church - liberalism and modernism were reactions against the infallibism of Pio Nono, for example). This is not to say that I approve much of what came after but I warmly welcome many of the changes brought about by the Second Vatican Council. Lumen Gentium attempted to correct (or supplement) a one-sided, and certainly imbalanced, ecclesiology expounded by Pastor Aeternus - a more holistic (but still incomplete - in my humble opinion) hermeneutic of Church governance and the foundation of the Christian life. Unitatis Redintegratio rendered obsolete the Church's previous hauteur and separatism in relation to the Ecumenical Movement. Paul VI's motu proprio Sacrum Diaconatus Ordinem restored the permanent Diaconate to the Latin Church; undoubtedly a liturgically orthodox move (although how disappointing that less than 10 years later he would abolish the Minor Orders and Subdiaconate). The Diaconate is just as important as the Priesthood - so important in fact that I think every parish should have one.
I used to hate Vatican II, seeing in its documents the very end of Catholicism. In reality the only people who hate it are bigoted Traditionalists. Now I am not so averse to the ''spirit of Vatican II'' as some people might think. Although to me the litmus test of one's orthodoxy is one's disposition to the Old Rite. If you hate the Old Rite, you are a heretic. If you like '62, you're a heretic - even a damnable heretic. Locutus est Patricius.
Posted by Patrick Sheridan at 10:32 pm
Email ThisBlogThis!Share to TwitterShare to FacebookShare to Pinterest