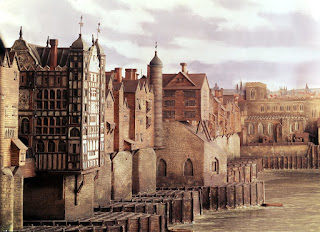 My friend Rubricarius sent me some proper antiphons for a martyr this morning which I read with delight. The first antiphon, Granum cadit, I thought rather pedestrian at first but when I read it back to myself that impression changed and I thought how Protestant my attitude was. This is the antiphon (in my translation):


The seed falleth and bringeth forth an abundance of grain; the alabaster jar is broken and its fragrance is released.

Seems rather sterile at first, doesn't it? No real insight here...but what a fool to think that! The antiphon is in praise of a martyr (of the Investiture Controversy, but leave that for the moment): this is fundamentally important. The two parts of the antiphon are truncated verses from the Gospel, from John 12:24,


"Verily, verily, I say unto you, Except a corn of wheat fall into the ground and die, it abideth alone: but if it die, it bringeth forth much fruit."


"And being in Bethany in the house of Simon the leper, as he sat at meat, there came a woman having an alabaster box of ointment of spikenard very precious; and she brake the box, and poured it on his head."

This, right here, is the genius of the Roman Rite. I don't know enough about the theology of martyrdom to comment further, the crown of life and all that, so I'll let the antiphon unfold and take shape in your minds. But just think for a moment. The martyr died (like the seed), his body was broken (like the alabaster jar), and his blood (like spikenard) gushed forth. It's succinct, rich and uplifting. My mind is ennobled just to read the words. This antiphon was no doubt composed by some devout, prayerful monk with a clear grasp of Scripture, and its use in churches (at Vespers, not constant Mass) served exactly the same purpose for the people of the time gone by as it did for me this very morning. And it is Old, as old as the bloody hills; not quite as old as Sts Philip and James which some perfidious types are celebrating to-day out of time, out of dark to the day's condemnation, but still much older than the spectacle of a man in white, leaning over a balcony as if to strike his devotees, and saying: "you must believe this, in exactly the way I am telling you."

Which, therefore, seems to you the more impressive? A liturgist (of the real, authentic kind, someone who prays and loves what he knows) composing this succinct antiphon, which is not overflowing with putative "correct" doctrine...or the other thing I have just described? And people accuse me of "liturgical fetishism" for being moved by such quaint things as...antiphons.

The martyr in question is Thomas of Canterbury, by the way.
Posted by Patrick Sheridan at 2:45 pm
Email ThisBlogThis!Share to TwitterShare to FacebookShare to Pinterest