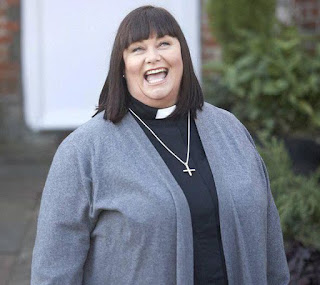 I'm not made of stone. I enjoyed The Vicar of Dibley just as much as the next bourgeois, metropolitan trendy. Brought to us by Richard Curtis (he of Four Weddings and a Funeral), the eponymous Rev. Granger is portrayed as a very nice woman (that's important), attractive, chubby, vivacious; qualities brought very much to life by the one and only Dawn French, and it's implied by Granger in the first episode that these are qualities one wouldn't ordinarily look to find in a typical male (presumably Evangelical) village parson with the words, "beard, Bible and bad breath." The conservative parishioners are portrayed as backward and dim-witted, or as stuffy old snobs. Eventually, as the series concludes, they all warm to her and the general consensus is: "well, women's ordination can't be that bad; we've had it rather good here." What a clever way to soften the blow of this revolutionary change in ecclesiastical polity: smother it with humour! I wonder if, when Francis or his bourgeois, metropolitan trendy successor ordains women, we'll see an Italian version of The Vicar of Dibley? No, I don't think we will. It wouldn't be as good as Dibley, and I really, really doubt if, by 2031, anyone will care that much about women's ordination in that private taboo and burden that a tiny remnant of "society" (if there is such a thing then) takes on themselves, which used to be called Christianity. Like Bibles in basic English, women's ordination seems to be a desperate trump card used by semi-Christian institutions to drag back a few curious, fair-weather Christians to the pews who, when they see the howling disaster of such a change, go back to secularism and materialism, even more disillusioned with the obvious charlatonry of mainstream Western churches and how irrelevant they are to their lives. Can you blame them?
Posted by Patrick Sheridan at 1:21 pm
Email ThisBlogThis!Share to TwitterShare to FacebookShare to Pinterest