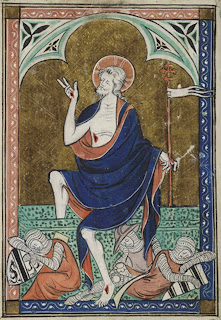 "'A great Shadow has departed,' said Gandalf, and then he laughed, and the sound was like music, or like water in a parched land; and as he listened the thought came to Sam that he had not heard laughter, the pure sound of merriment, for days upon days without count. It fell upon his ears like the echo of all the joys he had ever known. But he himself burst into tears. Then, as a sweet rain will pass down a wind of spring and the sun will shine out the clearer, his tears ceased, and his laughter welled up, and laughing he sprang from his bed." J.R.R. Tolkien, The Lord of the Rings, Book VI, Chapter IV.


My Irish grandfather was a "retired" Christian, like me. My father says it was a combination of things that drove him from the Roman church, his education by the Christian Brothers, brutal even by Irish standards, and other things that I don't know. But to-day, the Day of Days in the Christian kalendar, in my own troubles I recall the story I was told of him one Easter morning many years ago. An elderly lady from his parish, who was late for the Mass, found him sat on a wall outside the church unwilling to go in. She besought him by all the means that she could to go in with her, but he couldn't, and he picked up his cane and went home. So far as I know that was the last time he went near or by a church as living man.

This is roughly where I am. I would like to share in the joy of Easter, rejoicing that Christ hath beguiled Death by Death, but I can't. My heart is stone within me.

Posted by Patrick Sheridan at 9:00 am
Email ThisBlogThis!Share to TwitterShare to FacebookShare to Pinterest