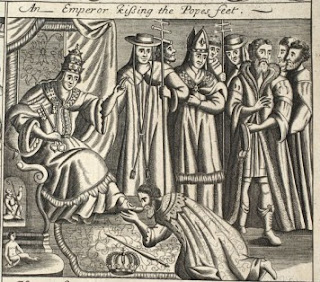 "The Emperor at once sent Boullotes, declaring to the Patriarch that he was striving on his behalf with regard to the Pope through messengers and that it was necessary that he also should resist. Then towards late afternoon, the bishops came again from the Pope and demanded the kissing of the foot. The Patriarch replied, with appropriate resistance: 'Where does the Pope have this from or which of the councils gave it to him? Show where he has it from and where it is registered. Nevertheless, the Pope says that he is the successor of St Peter. If then he is the successor of Peter, we also are successors of the rest of the apostles. Did the apostles kiss the foot of St Peter? Who has heard of that?' The bishops replied that it is an antient custom of the Pope and that everybody bestows this kiss on him, both bishops and kings, the Emperor of the Germans and the Cardinals who are greater than the Emperor and are also ordained. The Patriarch said: 'This is an innovation and I will never submit to doing it. But if the Pope wishes me to kiss him like a brother, according to our ancestral and ecclesiastical custom, I shall go to him. If he does not accept this, I am renouncing everything and turning back.' So the bishops went off to tell these things to the Pope and were away for a long time. Then they came again, saying the same things and: 'How is it possible for the Pope to be deprived of such honour?' But the Patriarch stuck to his earlier speeches and struggles. In the meantime many words were exchanged on both sides and much opposition was made about the kiss both by the Patriarch and by his entourage. In the end the Patriarch ordained: 'If the Pope does not renounce the kissing of the foot from our bishops and my cross-bearing officials, it is impossible for me to disembark from the ship. It seems to me that the present gathering and discussion is not in accordance with God's will, which is why God has brought to us such a great obstacle, whence I shall return without fail, while still in the ship, before I am troubled by other terrible things.' The bishops returned and informed the Pope of this and after a long time they returned and said this: 'His Holiness the Pope, for the good of peace and so that there should be no obstacle in this divine undertaking of the Union for this reason, sets aside his own right and behold, he invites your great Holiness to come. However, he stipulates that he wished to prepare his reception of you in a different manner, for he thought to make this in public in the gathering of officials and with a great display. Now, on the other hand, he will not do this because he is greatly robbed of his own honour and is not willing to make this obvious to all. Instead he will receive you in his own apartment, with only the Cardinals present. So come first with six of your own men with whom you wish to come and, after they have made their obeisance, let another six come and make their obeisance and, when they have left, again let another six come and make their obeisance, and let as many as you ordain make their obeisance in the same manner.'" From the Memoirs of Sylvester Syropoulos, recording the voyage of the Greeks to Italy for the Council of Florence, 1438-39 (emphasis my own).

It's unfortunate that the Pope wished to humiliate the Patriarch by having him kiss his foot in front of officials and with great display, and that only threats by the Patriarch of departure induced him to set aside his own "honour," and to greet him with the Cardinals privately instead. Does it remind my Tolkienian following of anything in The Lord of the Rings?
Posted by Patrick Sheridan at 4:06 pm
Email ThisBlogThis!Share to TwitterShare to FacebookShare to Pinterest