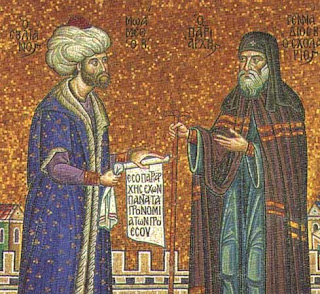 I have often been ridiculed and insulted for holding fast certain of my views. I have been proscribed, banned from commenting on certain blogs and, where I am not (yet) banned, simply ignored. I am also used to ridicule in civil life; mostly from people I have worked with (nearly always my own age), though not seldom strangers around town. I have been heckled and abused on the bus, refused service in a wine bar, even assaulted in my own home. I am used to it. I recently deleted a comment left by a renegade priest in the Netherlands who said that I was a "crackpot," whom "nobody could ever take seriously," and then suggested that I should be locked up for life in an insane asylum, gagged and muzzled and denied access to the Internet. To have elicited such shameful contempt, I think, says more about the abuser than the abused. Is he fearful of my words as those of a true seer? Why do my views touch a nerve so raw in him that he must make recourse to such harsh censure?

What views might they be? That the Pope of Rome is the Antichrist? That this can be proven from Scripture and even the testament of past Bishops of Rome, most notably St Gregory the Great and Preacher of Dialogues? Or my view that Lefebvrism is a pagan cult? Or that Mother Teresa was morally depraved? That Lady Diana Spencer was a dull ingrate whose death was both timely and many times deserved? Or perhaps people find my political views, or my views about Jews, blacks and the adulteration of British culture by mass immigration and secularism distasteful? I am not apologetic about holding these convictions. I regard myself as having a coherent, defensible moral position, and I think that if I did nothing else but breathe, eat and sleep people would still find reason to hate me. It is not unreasonable to imagine that some of my detractors genuinely wish I was dead.

The man who left the unpublished comment is one of the more enthusiastic proponents of the "social kingship of Christ," that disturbingly modern ideology (very much like Joseph the Worker) with its uttermost source in Papal hubris before God, and before the Italian people. I don't think I have discussed this before but the "social kingship of Christ" is a ruse. What it actually means is papal hegemony, the theocratic manipulation of world politics by priestcraft and sorcery, and power. Power of him in this world over me. Power to have me locked up in an insane asylum, gagged and muzzled, &c, and you might ask why? Free thought? For holding popes, garlanded with so many titles and responsibilities, to high standards? For being openly queer, perhaps? And people wonder why I'm not keen!

I must say the "social kingship of Christ," as I have described it, sounds an awful lot like the Islamic "Pact of Umar," or the old "dhimmitude." Albeit somewhat relieved by the Turks (largely under pressure from Britain and France), the principles of dhimmitude were observed throughout the Muslim world wherever there were people of other faiths, mostly Christians and Jews. It was systematic humiliation. Dress codes (of inferior cloth), doorway height, permitted mounts, an inferior legal status, the exaction of punitive taxes, and even the occasional ritual slap in the face, all served to reinforce the dominance of the Mosque and the humiliation of the Church. Christianity was tolerated in principle, but Christians were not allowed to build or repair churches, they were not allowed belfries and they were certainly not allowed to proselytise among Muslims. Dhimmitude was also an effective means of weaning converts to Islam. If you reverse the names, change Muslim to "traddie," and "Christians" to "Patricius," and you can tell what kind of humiliation people wish to see me suffer. And I have no doubt at all that some, perhaps all, traditionalists wish for the revival of the old Temporal Power in this way so that they can heap these humiliations upon their foes. Not all traditionalists are embarrassed by the Fourth Lateran synod, as Fr Hunwicke said the other day.


Thank God for the liberty of the Gospel, that's all I can say!
Posted by Patrick Sheridan at 9:00 am
Email ThisBlogThis!Share to TwitterShare to FacebookShare to Pinterest