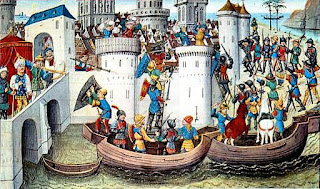 See the thread over at my recent post "Seeing..."

Someone once said that people who go on about the Sack of Constantinople by the forces of Western Christendom in 1204 conveniently forget the "massacre of the Latins" in 1182 at the hands of a Greek mob. That may be true of some but it's not true of me. I am not saying that I have sentimental feelings about an atrocity that took place eight centuries ago, still less that I have any sympathy at all for greedy Venetian and Genoese merchants who grew fat off the decadence of a diminished Empire, but before we get into "who started it," I think it behoves us to remember the danger of excusing present action because of perceived collective past suffering. David Grün and Golda Meyerson knew this very well by cynically turning the "holocaust" to their advantage, and we see this also in a petty way in the kind of positive discrimination enshrined in race relations, disability and other equalities. You may not be a Nazi, or a slave driver, or a homophobe, or whatever. But that doesn't matter, your parents were Nazis, your grandparents owned slaves; there is a cultural debt. No doubt some of the Venetians pounding at the gates of the most Christian City in Europe had relatives killed in the massacre, but does that excuse what they did? What they set up? No it doesn't, and I maintain that the events of that year were among the most grievous and regrettable in the entire history of the Church. Unforgivable, even.

"'Work of the Enemy!" said Gandalf. 'Such deeds he loves; friend at war with friend; loyalty divided in confusion of hearts.'" J.R.R. Tolkien, The Lord of the Rings, Book V, Chapter VII. As ever, Gandalf is the voice of reason and reconciliation.
Posted by Patrick Sheridan at 6:54 pm
Email ThisBlogThis!Share to TwitterShare to FacebookShare to Pinterest