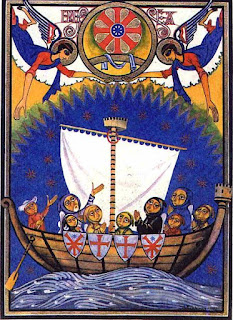 '"Pippin,' said Frodo, 'didn't you say that Gandalf was less close than of old? He was weary of his labours then, I think. Now he is recovering.'
"And Gandalf said: 'Many folk like to know beforehand what is to be set on the table; but those who have laboured to prepare the feast like to keep their secret; for wonder makes the words of praise louder."' The Lord of the Rings, Book VI, Chapter V.

In all the years that I have been reading Tolkien, I have never fully understood this; furthermore it reminds me of some theme I have read elsewhere. Can anybody offer a suggestion from the corpus of Christian literature? It is faintly reminiscent of something, like Reepicheep's coracle from The Voyage of the Dawn Treader, or that passage from The Pilgrim's Progress about the burden being loosed from Christian's shoulders, "then was Christian light and gladsome."

Art: S. Juchimov, a Russian illustrator. Gandalf is seen in a blue mantle, like his archangelic sire Manwë. As Treebeard saluted him so movingly at Isengard: "Well, come now! You have proved mightiest, and all your labours have gone well."
Posted by Patrick Sheridan at 6:23 pm
Email ThisBlogThis!Share to TwitterShare to FacebookShare to Pinterest