Loyalty in the republic... 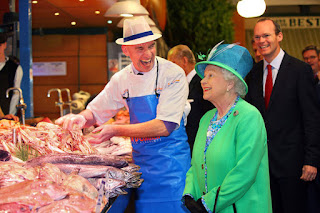 Some Roman Catholics in the Free Six Counties might despise Her Majesty and would do away with the Monarchy, but it's encouraging to see that their kindred in the South think otherwise (about 77% of the Irish people were in favour of her visit, according to one poll). These two images are from Her Majesty's state visit to Ireland five years ago, the former at a fish market in Cork, the latter at Buckingham heap, I think the same year. The fishmonger is Pat O'Connell, who is not concealing a knife, is not crying out tired, bitter republican slogans about "freedom" from British rule, and such rot. You can tell by his face that his feelings are heartfelt and genuine, and that he feels rightly privileged to be in the presence of a Christian Sovereign, the only one left, who in her turn takes a genuine interest in the variety of the fish on sale at his stall. It is my view that the republic of Ireland should return to British rule, renounce the Euro and that the Church of Ireland should be re-established, and that the Irish people should sever all connexions with Popery, which has brought them nothing but poverty, ignorance, paedophilia and is ashamed of them anyway. 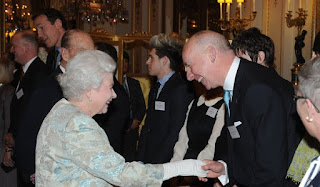 God Save The Queen!
Posted by Patrick Sheridan at 11:07 am
Email ThisBlogThis!Share to TwitterShare to FacebookShare to Pinterest