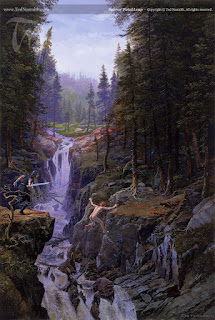 "Then Túrin became weary, and he looked about him, and knew the bitterness of exile; and for all the light and laughter of the Elven-halls his thought turned to Beleg and their life in the woods, and thence far away, to Morwen in Dor-lómin in the house of his father; and he frowned, because of the darkness of his thoughts, and made no answer to Saeros." J.R.R. Tolkien, The Children of Húrin, chapter V.

Far be it from me to add to where Tolkien left off but I can imagine this very vividly. Túrin would have turned away and sighed a heavy sigh, and felt as though his heart had been pierced by a burning lance. A shadow, scarce to be concealed, would then come over his fair countenance, the sun would become wan amidst the day, and he would long to be far, far away. This is called loneliness, and if my description of it resonates with you, then God knows I understand it too well. Like Túrin, I feel lonely most often in the company of others. On those rare occasions that I go to church, at work. I have felt it at a friend's house in the deep country; I have felt it at parties (that is in those far off days when I was still tolerable enough to be invited to them). I feel especially lonely in town. It seems ironic that we might feel lonely in the company of others, surrounded by people. One thinks naturally that the tonic for loneliness is people. But there is a distinction between the state of being alone and being lonely. There are times when my mind wanders, through bucolic idylls into cathedral churches in the time gone by, but then I come back, either to an empty room or to my workplace, and whatever pleasure I took in my mind's palace is gone.

Is there a cure for loneliness? Because it clearly isn't people.

Art: Ted Nasmith. It depicts the unfortunate events that took place the morning after Túrin felt the bitterness of exile.
Posted by Patrick Sheridan at 9:11 pm
Email ThisBlogThis!Share to TwitterShare to FacebookShare to Pinterest