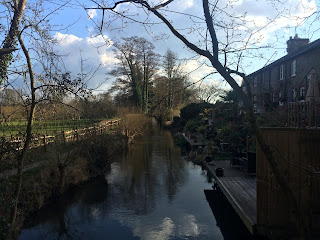 "Less doth yearning trouble him who knoweth many songs, or with his hand can touch the harp. His possession is his gift of glee, which God gave him."

So says the Anglo-Saxon Chronicle, as quoted by J.R.R Tolkien in one of his letters. I am terribly glad that my head is full of hymns, madrigals, poems and large chunks of the Psalter. Boredom is something we all feel at whiles but at least with the memory of these things we can stave it off. I have a very mind-numbing job. "Pick, scan, pack, scan," that's my routine four hours out of the day, four days a week. As I undertake my menial tasks my mind naturally wanders. I can walk in the glades of Ithilien with Legolas as he sings of Nimrodel, breathing deep of the abundance of parsley, sage and lily flowers that grew there in peace and listening to the distant music of water falling over stone in swift cataracts; or I could sit in choir in Notre Dame de Paris (circa 1450) on some high feast as the Cantor bids the clerks of Mattins begin the first nocturn with his rod of office. That pious longing and profound regret is, to my mind, the beauty of holiness, but to others is "liturgical fetishism." But I digress.

As I sat on the bank of the River Darent the other week I listened to the swift-flowing river and thought of Ulmo, that kingly yet lonely Ainu who kept in his heart most faithfully the will of God. It's said that in water, Ulmo's province, is heard yet an echo of The Music of the Ainur. For those of you who don't know, The Music of the Ainur is Tolkien's cosmogonical myth, the primeval angelic chorus in which was conceived the world and all its history. Before all things God had made the Ainur, the holy ones, and taught them many things, and the greatest of them was music. Now he would speak to them, propounding to them themes of music and joyous hymn, and their minstrelsy arose in splendour about the divine throne. On a time God told the Ainur of a great theme, unmatched in its vastness and glory than aught else that he had revealed before, and he bade them "make a great and glorious music of this theme," whereat the harpists and lutanists, flautists and pipers, organs and countless choirs singing with voices began a great music, and God listened. Has anybody thought about this in detail? Has anybody endeavoured to conceive of the majesty of this music, its length and structure, or its intricate subtleties and harmonies? How did it begin? Did it begin with thunderous acclamation like "fecit potentiam" of Victoria's eight-part Magnificat, or quiet and sweetly like Morley's summer madrigal "Now is the Month of Maying?" Was it liturgical? Readers will not be surprised to learn that this is my conception of The Music of the Ainur! Like the twenty-four elders with their harps and vials before the throne in prophecy, this music was both adoration and proclamation, a telling of things known from eternity and yet new, with each chord in praise of the divine majesty. But who read the lessons? Who superindended the service? Who ruled the choir? Was time observed in some way? There was no moon, sun or stars. Singing of something so grand as the world from its infancy to the days of eternity must have taken some time, maybe even the six days of Genesis. We're told that those with the deepest understanding of the Music were those who sang not but hearkened, like archdeacons in a mediaeval choir. Perhaps these (among them Gandalf, as he became) were the proto-theologians and liturgists of Middle-earth!

Oh, I know The Music of the Ainur is myth but I do think that Orthodoxy (that is right worship), just as water in any stream, salty sea or mill pond, is redolent of it. And isn't that the whole point of divine worship? To make it as a mirror image of the angelic chorus and liturgy in heaven? Those who say otherwise, be they slack modernists who say there is no point or time in the fullness of liturgy, or traditionalists who say likewise (those apt to label me a "liturgical fetishist," for example), have profoundly missed the point. I put it to you that the prime purpose of life is to worship God in spirit and truth, and the beauty of holiness...and it seems to me that a low mass, without song, just doesn't come close.

I go over these things constantly, as I follow the "pick, scan, pack, scan" routine or sit watching a shallow river in rural England.

As a curious aside, please note what Ilúvatar says of existence: "those things that ye have sung and played, lo! I have caused to be - not in the musics that ye make in the heavenly regions, as a joy to me and a play unto yourselves, alone, but rather to have shape and reality even as have ye Ainur, whom I have made to share in the reality of Ilúvatar myself." Aquinas, anyone?
Posted by Patrick Sheridan at 9:00 am
Email ThisBlogThis!Share to TwitterShare to FacebookShare to Pinterest