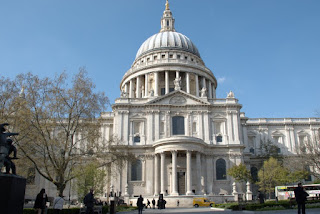 It didn't look that clean when I was there! What must have been fifty years of corrupt, Wahhabi fuel was caked on the walls.

The year 2003 was a very formative year for me. I was 15 years old. When I had a meeting with the school's "careers adviser," I had said that I wanted to do something "religious" for my "work experience." A week later she approached me in one of the corridors and said that there was a vacancy at St Paul's Cathedral, and I jumped at the opportunity. From my earliest days I had been fascinated by Wren's church, and I used to draw it a lot. Its indomitable dome, with its splendid galleries, the iconic statue of St Paul over the portico. As I recall, it was always disappointing that the church was Anglican instead of Roman. I had been there as a little boy, of course, and on a clear day I could see it (as one cannot see it now, what with shards and gherkins obscuring the view) from the top deck of a bus going over Shooter's Hill. On my first real tour of the cathedral, on my first day, the virger had told me that the empty vaults about the nave were designed for statues of the saints, were Britain to become a Roman Catholic nation again. When I think about this assertion now I'm not actually so sure, and think that the vaults might have been designed for secular memorials instead, like the scandalous Wellington monument with its ugly equestrian figure. Although I do recall that there was a movement in Anglo-Catholic circles in the mid-20th century (my old friend Jeffrey was part of it) to have the High Altar moved to beneath the dome, in tawdry imitation of a pagan basilica in some other country. Does anybody know aught about that?

On my first day I had a meeting with the HR Manager, who gave me three options about placement. The first was to work in the cathedral shop, the second was to work with the Cathedral Stewards, and the last with the Virgers. I chose to spend my two weeks with the Virgers. I then had my first meeting with the Dean's Virger, who then beckoned the youngest on his staff (only eight years my senior) to give me a tour of the place. I reckon the two weeks I spent at St Paul's as two of the most enlightening and privileged of my life. I met the Bishop of London, +Richard Chartres, on one of the morning rounds. We were delivering mail and I knocked at the door of his house at the Old Deanery, expecting some secretary or servant to answer, and there he was in the flesh, a towering and truly episcopal character, and a nice man. He asked me some routine things about my school, and aspirations (in those days "respected theologian and canon lawyer," quite normal for a boy of 15), and I saw him celebrate a liturgy in the cathedral on my last day, although I cannot remember the occasion. I met an Anglican nun during my stay too. I have forgotten her name but I do remember feeling embarrassed eating with her. She had a frugal lunch and I had brought a large piece of chocolate with mine. I had never heard of Anglican religious before then. One of the older Virgers was very interesting, and tested my hagiographical knowledge as we went through one of the vintage copes together. I didn't do so badly but my former prejudice that Protestants knew less about saints than Roman Catholics was dashed on that afternoon.

My two weeks at St Paul's was also the occasion of my very first Latin liturgy. On one afternoon, one of the Anglo-Catholic Virgers (incidentally, that's how they spell it there) and I went to...now this is embarrassing because I can't remember the name of the church. It was within walking distance of St Paul's, it was an Anglo-Catholic church, and it was for a service of Benediction. I think it was St Alban's, Holborn, but I'm not sure. I remember enjoying the Latin, which I had studied at school, but looking aghast at these Protestant chaps prostrating before their mute host at veneremur cernui (of course, these days I would look aghast at anyone who bowed before a round, bewitched disk). This was in stark contrast to the sober Evensong I attended at the cathedral that evening, which was a special service for retired yeomen, I think.

My Irish grandmother came up to see me on one of the days. We went for lunch south of the river to a French restaurant and on the way back we met the Dean, Dr John Moses. He had seen me about the place and, like the Bishop, asked me the politest questions. He didn't know my grandmother but they clearly knew some of the same people and got on rather well.

I miss the two weeks in June that I spent at St Paul's. I liked it so much that I would go into town an hour early to catch the end of the said Communion service in St Dunstan's chapel and help out in the vestry. I learned much more about liturgy there than I ever did in my own parish church, and it wasn't until the November that I attended my first "traditional Latin Mass" ('62 vintage), a low Mass, at the London Oratory and came away, thoroughly dissatisfied, and thinking that the Church of England did it better.
Posted by Patrick Sheridan at 1:40 pm
Email ThisBlogThis!Share to TwitterShare to FacebookShare to Pinterest