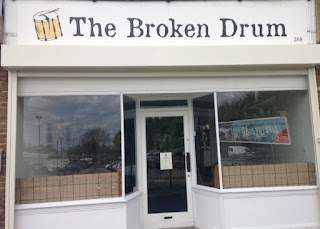 I took some woolen trousers to the dry cleaners in Blackfen this afternoon. I noticed over the door to the back room a silver plaque, featuring a book with some faded Arabic script. I asked the proprietor about it, and he seemed reluctant to say what it was (I knew what it was). He said that it was a Qur'anic blessing, but his embarrassment was clear to see (he kept mentioning extremists, and that he was just "an ordinary guy"), so to put his mind at ease I told him that I owned an English translation of the Qu'ran, that I had read bits of it, which he found reassuring. But I stopped short of telling him that I was a Christian; not out of fear that he might ruin my trousers, just out of a sense of shame. If I had told him, I would no doubt have said that it was Good Friday, which would have put me in the awkward situation of trying to explain to him why I was having my dry cleaning done on Good Friday, and why I was not at church, and why I had not made even a feeble attempt at fasting, and all those other things. Also why my faith was so lukewarm. It's there, and God willing always will be, but is as embers dying in a corner of the hearth, scarce to be noticed and giving no warmth or succour.

I suppose my brief conversation with the young Muslim chap goes to shew you that opportunities to preach the Gospel always present themselves. This seems all the more reason that we should have a lively faith in God, and not the kind of apathetic, "Lord, you know how it is" faith that I have.

Let me explain the picture: it's a "micropub," Blackfen's very first. It's been open for about a year, I think. It's not often that I "plug" local businesses, considering most of my audience are in the United States of America and Russia, but anybody in the Bexley area might like to pay a visit some time. The dry cleaners is next door and rather kindly, for a Muslim-run business, promotes it too. That's called neighbourliness, a quality distinctly lacking in multicultural Britain.
Posted by Patrick Sheridan at 8:30 pm
Email ThisBlogThis!Share to TwitterShare to FacebookShare to Pinterest