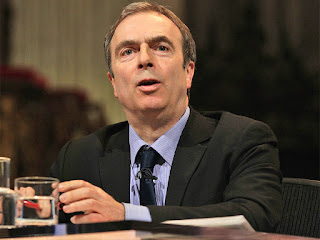 It's hard not to admire Peter Hitchens. His articles are bethought of a mind both subtle and profound, and very sharp. He knows much more than I do about British constitutional history and politics, and has a sincerely felt conviction in the defence thereof against the ineluctable tides of secularism, indifference and philistinism. I don't agree with his every view, particularly his commitment to Zionism, but he argues for his positions with clarity. I know from experience that he doesn't suffer fools gladly. I wrote to him once about a painting in his house (I assumed it was his house) which reminded me of the view of London from Shooters Hill, with a few other comments about his latest book "Short Breaks in Mordor." I was amazed that within ten minutes I had a reply, which was both strangely complimentary and condescending. The impression I got was that because I didn't have an encyclopaedic knowledge of his every published work, I was an idiot; although I must stress that he did not say that. I felt "stung;" that seems the best word. I never wrote back.

He has recently been very spirited in the defence of Bishop George Bell, an heroic and saintly man cheaply discarded by the Church of England on an (almost certainly false) accusation of paedophilia. Mr Hitchens is to be commended on this. He also occasionally appears on BBC's The Big Questions, a faith discussion show hosted by Nicky Campbell on Sunday mornings. I seldom watch this because the BBC scrapes the multicultural barrel of Britain to undermine the sanctity of the LORD's Day by discussing such things as: "is there more truth in Shakespeare than the Bible," and "is it fair that we have bishops in the House of Lords?" at a time when we all should be in church. But Mr Hitchens' forbearance is formidable, and he once said, in response to some hackneyed feminist drivel, "no wonder nobody goes to church these days, if they believe this sort of flim flam is what goes on on Sunday mornings!" He is absolutely right.

Mr Hitchens, very much like me, is a lonely voice in a howling wilderness. I would there were more journalists like him. Presently the only one I can think of is Polly Toynbee, but she is only like Mr Hitchens in the sense that they are of a similar standard, class and generation. Their views couldn't be more different, and, unlike Mr Hitchens, Toynbee represents a worldview I heartily detest. As usual, I digress.

There are two articles by Mr Hitchens that I would recommend. The first, from 2011, a response to the "riots" we saw in London that summer. The next, a response to the parliamentary vote to bomb Syria in December. He's a good egg.
Posted by Patrick Sheridan at 4:23 pm
Email ThisBlogThis!Share to TwitterShare to FacebookShare to Pinterest