Send in the clowns... 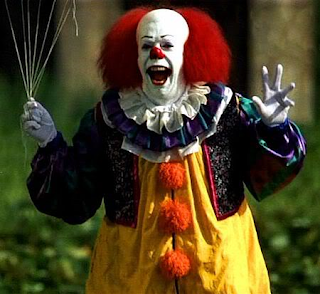 See here for David Sullivan's succinct analysis of what I've spent the past week and more complaining about. Sedevacantism is far more sensible than mainstream traditionalism but it cannot exist outside the framework of modern Romanism, the construct of 19th century Ultramontanism, which is why it is inherently fallacious as a position. Traditionalism is worse in that it seeks to be respectable, where Sedevacantists can be dismissed (unfairly?) as fanatics, but it seeks justification for its existence by recourse to positive legislation of the contemporary "magisterium." Tradition simply doesn't come into it, to say nothing of the bogus "hermeneutics" (a posh word for reading what you want to read) traditionalists apply to contemporary magisterial texts, on such things as "climate change," or references to dubious 20th century genocides.

It seems to me that if you want to be a Roman Catholic, just be an ordinary one. Swim with the tide, and faster. To be a "traditionalist," of whatever sort, is both to have given up the struggle, and to be too selfish to move on. They're both the same. Since the Western patrimony is objectively dead and found only in the libraries of cathedrals and universities, I don't really see how to identify as a Roman Catholic, and to believe in Roman Catholic teachings, has anything to do with concern about such ephemeral things as the hymns of Prudentius or where the thurifer stands at solemn vespers. Prudentius never belonged to the modern Roman church anymore than Luther did after he proclaimed his heresy. Would either of them have believed in papal infallibility, or accepted the teaching implicit in Nostra Aetate (to pick one document) that we're all the same, really? Here my detractors would point out Newman's "doctrinal development" and say that I am being cynical. Maybe I am cynical. But what is "doctrinal development" but relentless progress? Just like the evolution of mankind or scaling that skyward tower built by the sons of men. One pope, in the seventh century, might have (rightly) condemned episcopal hubris; and then another, over a thousand years later, proclaims himself the embodiment of the whole Church. It's a non sequitur!

If you accept all this as divinely sanctioned, following the only scripture pericope known to most Roman Catholics (you know which one), that's up to you. You are at liberty to do so. But what I don't understand is the attachment people feel, who accept this "doctrinal development," to the externals of what tradition they think fitting to hold onto. As such, I have come to be deeply suspicious of anything even remotely "high church" within Roman Catholicism. Why would you be concerned about the hymns of Prudentius, Ambrose and the other Latin Christian poets when these have been replaced by divinely-sanctioned authority? Or arbitrarily brought back as the case may be! Why feel regret at all about the passing of much that was so sure and venerable by swift and nondiscriminating legislation? Surely communion with your local priest, that's right! the trendy one who insists you call him "Bob," is more important? Why not avail yourselves of the treasures at his command? Join the fun! Swim with the tide! Because by fighting against the tide you're surely putting yourself at variance with the mind of the Church? Sentire cum ecclesia, and all that. What did we say about relentless progress? If the church has said: "Oh, we don't pray in this way, or believe such things, anymore; that's how Christians prayed and believed in savage, politically incorrect ages," then surely it is your bounden duty to obey without question and ignore the tradition, doctrine or discipline that has latterly been driven into a vast, underground lumber room, like so much embarrassing furniture (like Limbo, or the sale of Indulgences), and the doors sealed? Otherwise you're just doomed to despair, to be forgotten within a generation. Just as before railways each town had its own "time zone," reckoned by a sundial, so before the Council of Trent there was a rich plurality of liturgy and tradition in each town and province. Who remembers it?

Rome has no intention of ever undoing the reforms of the Second Vatican Council, or abolishing the Novus Ordo. To do so would be to undermine her self-proclaimed infallibility. Like the discords of Melkor in The Music of the Ainur, these things have simply been taken up into her narrative, except that this narrative will not end in the triumph of good but the declension of noticeable difference between Roman Catholics and people of other faiths, even atheists. In purely business terms, if you're not with this programme, if you're not fully flexible, adaptable, if you do not embrace change and diversity...then you might as well just pack up and leave!

Or you could remain Sedevacantist, or Lefebvrist, or neo-conservative, or traditionalist. But what do you have that cannot be found, better and healthier, within the Orthodox Church?
Posted by Patrick Sheridan at 3:00 pm
Email ThisBlogThis!Share to TwitterShare to FacebookShare to Pinterest