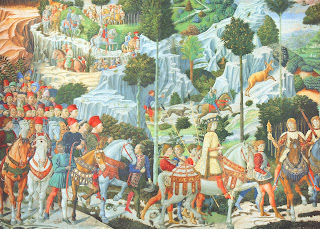 A while ago I had claimed (without evidence) that even at the Second Council of Lyons (1274) the Greeks had been scandalised by the decadence of the Latin liturgy. I made this claim having vaguely remembered reading a footnote somewhere that suggested this. I haven't been able to find it, nor do I even own a detailed study of the council save two chapters in Henry Chadwick and Adrian Fortescue's hyperbolic and certainly biased account. But I have been able to find this:


"While the long months dragged on in this strange land [Italy] the Greeks got very homesick; they understood nothing of the rites they saw around them, they complained that when they went into a Latin church they could make nothing of the ikons, there was not a single Saint they even knew by sight, the crucifixes were solid statues, all they could do was to chalk up two lines on a wall cross-wise and say their prayers before that. Indeed by this time the liturgy of either side had become a deep and suspicious mystery to the other. Towards the end of the council [of Florence] the Pope was to assist in state at the Byzantine Liturgy. Then he said that he was not sure what they did and that he would like to see it all done in private first before he committed himself to a public assistance. Naturally they were very indignant. On this occasion the Emperor let fall the astonishing remark that they had come all this way to reform the Latin Church. The Greeks could not bear our plainsong, but they had the comfort of being able to wear far more gorgeous vestments. The old Patriarch Joseph never went back to his own country. He died while the council was going on (10th June, 1439), having first written down his acceptance of the union and his acknowledgement of the Roman Primacy. So he was buried with great honour at Florence in St. Maria Novella. There he still lies, far away from his city, among the Latins whose ways he could not understand, and a set of Latin verses over his tomb still tells the traveller of the strange chance that brought 'Joseph, the great prelate of the Eastern Church,' to be buried here." Fortescue, The Orthodox Eastern Church, pp.213-214.

The trouble is, this is not what I remember. I was sure it was at Lyons that the (undoubtedly few) Greeks present had found the Latin liturgy, rather sumptuous compared with its mediocre Tridentine descendant, distasteful. I wonder what it was? Low Mass? It can't have just been plainsong, which in those days was unlike the corrupt Solesmes stuff. They were experimenting with polyphony at Notre Dame de Paris in the 14th century. Still, I expect it was just ignorance, rather like that ridiculous, if well intended, epistle the Greeks sent to pope Francis imploring him to renounce his heresy. To properly critique the Latin liturgy, it takes somebody who experienced and practised it for years - like me. As for such ephemeral things as statues, I rather like "solid statue" crucifixes, and the "ikons" unfamiliar to the Greeks in Florence were probably painted by some disciple of Duccio or Giotto, perfectly apt to be used in divine service. The finest church in Western Europe is the royal chapel of the Kings of France, the Sainte Chapelle, which glories in those Latin things so anathema to the Greeks, three-dimensional images, and stained glass. There is, or rather was, a unifying spirit of liturgy common to both East and West in the Middle Ages. Would that legitimate custom were allowed without prejudice, and superstitions rooted out (as well as false doctrine), then the history of the Roman Empire might not have been cut so tragically short.
Posted by Patrick Sheridan at 5:09 pm
Email ThisBlogThis!Share to TwitterShare to FacebookShare to Pinterest