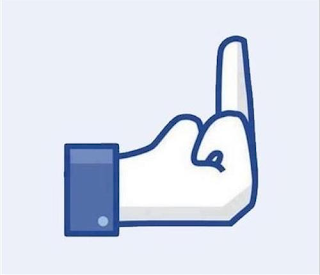 I had a very active Facebook account until about four years ago, when I deleted it. I had initially set up my account to keep in contact with friends of mine from Heythrop who were moving away, moving up in the (mostly ecclesiastical) world, because at the time I became acutely aware that Facebook was fast becoming the sole means of maintaining human contacts in a globalised world. I can't say that I didn't enjoy using it. I uploaded lots of photographs, was "tagged" in quite a few too. Many people found my posts humorous and insightful, as they sometimes do here. These are all gone forever now, even if I can remember half of them or see them in my mind's eye. You see, as sometimes happened with my books, I purged them completely. I didn't simply request that my account be deactivated, to be restored at any time I fancied to return, I deleted everything manually (which took some hours), and then submitted a request for permanent deletion.

Why did I do this? There are many reasons. One was my near obsession with using the service, which is never a good thing. Upon waking I would instantly turn on my iPhone and go through the app, checking notifications, looking at friends' posts and pictures, and so on. Another was the pent-up envy that came of being constantly exposed to the lives of people better off than myself. "Look at me, I'm on holiday!" or: "we're having a brace of lobsters for dinner tonight, and champagne." What was also apparent, and certainly depressing, was the absolute contrast between my work and my social life, which came together on Facebook. People at work would send me friend requests, just as my real friends would (and not seldom people I'd never met). Most of these I accepted, just to save face. Since we spend most of the year with our work colleagues it wouldn't do to offend them by letting them hang! But I found this mingling of the two worlds troubling, not because I am a different person in either but because I wanted to keep work and leisure strictly separate. I remember feeling distinctly embarrassed when a friend (of a friend), a rather obsessive chap, made a number of verbose comments on a photograph in which I had been tagged by my friend Nina. When I next saw her she asked who he was, and I could see that she also found the situation embarrassing; a situation exacerbated by my attempt to delete his comments, which was met with: "my comments seem to have disappeared. What I had said was," &c.

Occasionally, although I later stopped caring, I would ask work colleagues what they thought of "my Facebook." The general consensus was: "well, I don't understand your posts most of the time." One woman, Mary, even said: "I don't like it when you use big words," which made me feel very sad for her. Having, therefore, work colleagues as Facebook friends just exemplified how different I was from them and by extension how lonely and peculiar I was by nature.

After I deleted my Facebook account I sent a circular e-mail to many of my old friends explaining my decision. Some wrote back with promises of contact, even meeting up, open invitations to visit them, and such things. None of them ever materialised, and even the few who remained in contact with me whittled away one by one, sooner for those who genuinely didn't care, later for those who made some effort. Some begged me to come back, one ostensibly on the grounds that she found the traditional means of contact (such as writing) a waste of time! I don't have sentimental feelings about these people to-day. People move on and if my list of friends has shortened considerably to a small nucleus of true friends then I think my decision to end my connexion to this suspicious online mob was a good one.

Of course, now that I am in a new job (since October) I am having to reject repeated intercessions from new colleagues for me to set up a new account. Karen (with whom my manager thinks I am having an affair!) is especially keen. The girls are doing a Cancer Research walk in the summer. As I think I said here, I can think of worthier causes than that but registration was through Facebook, and it would have been nice to have been asked. I do but pay the price for my conviction, I guess.
Posted by Patrick Sheridan at 9:00 am
Email ThisBlogThis!Share to TwitterShare to FacebookShare to Pinterest