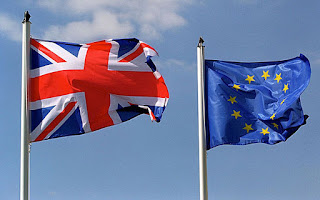 "I do not believe that this nation, which has maintained and defended its independence for a thousand years, will now submit to see it merged or lost. Nor did I become a Member of our sovereign Parliament in order to consent to that sovereignty being abated or transferred." Enoch Powell.

"Government, Whitehall, and the whole of Fleet Street are still trying to brainwash the British people, of all people, into believing that we are quite unfitted to exercise the same basic right of self-determination." Anthony Wedgwood Benn.

Many people who go to vote in the upcoming referendum on Britain's membership in the European Union will have immigration on their minds. I know this to be true of my family. I haven't decided yet on whether I am going to vote at all - I don't believe in referenda; the concept is repugnant to our constitution - if I do vote, it will be to come out. But the issue for me is not one of uncontrolled immigration (which a cessation will scarcely fix anyway), but a democratic principle, the principle of Britain's sovereignty as a nation, which is absolutely precious. A thousand years of history is in the balance, and I am not so apathetic about the United Kingdom that in fifty years time, when I am as dotard as the serfs of Hithlum under their own foreign masters, I will look back at June 2016 and say that I did nothing to uphold the principle of Britain's sovereignty, without a sense of regret. Of course, my conscience tells me that it matters not at all whether we leave the EU or not. The damage to our common morality, economy, constitution and general way of life has already been done, is irreparable and cannot be made as though it had never been. But that doesn't mean that we shouldn't try and, despite the obvious risks and uncertainty, leaving the EU seems the best stimulant for a revival of Britain's greatness, to reassert our democratic rights on the world stage. The only other option would be for Britain to be absorbed into an anti-democratic, unaccountable continental oligarchy over which we have no veto, no control, no say; and what a pitiable end to a nation that has contributed so much in the way of literature, law, liberty and liturgy.

Of course, we won't leave the European Union. It is almost inconceivable. The "out" campaign has no credible establishment support, and is out-financed and out-manoeuvred by the "in" campaign which has the enthusiastic support of the Prime Minister, the Leader of the Opposition (after a political career of consistent, old-fashioned Labour opposition to Europe), virtually all business magnates, the President of the United States, the Pope of Rome, so far as I know all European heads of state, and so on. Because of this I predict that the result of the referendum on EU membership will be a resounding "yes," to remain vassalled to Brussels with all the malefits of membership; eventual monetary and economic union, open borders (and with the inevitable accession of Turkey to the EU we would then have a border with Iraq and Syria!), &c. This is because people will vote to keep the status quo. They're deathly afraid that Britain, alone, an island (off the coast of...America?) will not survive, and will lose international influence. The fact that our membership in this godless utopian project destroyed our farming, fishing, and manufacturing industries, small businesses, disunites people despite its apparent aim, and costs us billions per annum seems not to worry them.

For all this rhetoric, it's over anyway. I suppose this is a roundabout way of saying what others more experienced than me have been saying for years. We're finished no matter which way the vote goes. Our fate was sealed forever when Mr Heath (former MP of my constituency) deceived the nation about the true political ambition of the then Common Market and brought us in, when, had he been honest about European federalism, political and economic union the British people would never have agreed to it. Fundamentally, this referendum is about our democratic right to self-determination. Do you want to be governed by unknown foreign bureaucrats or by your known, elected representatives in Parliament? It's that simple. You can attach all the qualifications and what-ifs you like but I would much rather be a subject of a true sovereign nation than to live in England, but to have this constant reminder that it's not really my own country anymore.
Posted by Patrick Sheridan at 9:00 am
Email ThisBlogThis!Share to TwitterShare to FacebookShare to Pinterest