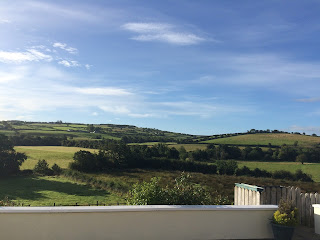 Taken on the morning of 15th September 2015 in Ballybofey. Lest it be lost forever...

Very few photographs (of the very few that were taken) of me within the last ten years have survived. This is personally regrettable but is due almost entirely to the wonders of modern technology. The last time I used a real, old-fashioned camera with a film was eleven years ago when I went to Germany, and I don't think I ever had the photographs developed. Afterwards mobile telephones and digital cameras took over. I was late in acquiring a mobile telephone. I certainly didn't have one at school. Neither did my parents in those days. And I have never owned a digital camera. My mother bought me a cheap mobile telephone as a Christmass present in 2006 because I was going into West London everyday and she thought I should take advantage of this new technology to keep in contact. It transpired that I dropped out of Heythrop at this time and I seldom used the wretched thing anyway. But despite the phone's camera facility I never took any photographs on it. Longing, stupidly, to move with the times, in January 2009 I purchased an Apple iPhone (the 3GS model), and I have been saddled with one since. It was at this time that I first joined Facebook, and Facebook was the forum to upload all the photographs you could take. Most of my friends at the time were busy uploading "selfies," which to me seemed a form of idolatry; whereas I was content to take photos of days out to the country, or visits to churches, &c. I can't recall how often this happened but my iPhone "crashed" several times, and I never had enough sense to back my photos up. As a result, and coupled with my Facebook account deletion, I have very few photographs of myself, or my family, or any occasion, roughly between the years 2005 and to-day. Even my present iPhone "crashed" over a year ago, and I lost everything, so any of the hundreds of photographs I took on my present iPhone are lost, forever.

I only say that the loss of these photographs is regrettable because when I was in Ireland back in September I was delighted to spend an afternoon going through my grandmother's many voluminous photo albums, handsomely bound, precious troves of memories. Looking at the photographs (many of which she hadn't seen since they were taken), she would say something like: "Oh, let me think. That was taken, erm, before I went to Spain with Frederick [my grandfather], and you can tell that it was taken before 1965 because I was wearing those pearls, which were an anniversary present." Or to another photograph, she would say: "Oh, I remember this! That's Antony Tudor and me at Covent Garden, about 19....59, I think." To a very old one (with a drop of white paint on it) she said: "That's Fiddy [my great uncle Fidelis] and me, when I was about two."

These photo albums were locked in a cupboard in one of the upstairs bedrooms. That is to say, they occupied a physical space, were treated with some care and reverence, and seeing them brought back emotive memories. It seems to me that with the loss of my own photographs "into the stratosphere," as O'Brien might say, I have nothing to look back on in the dark years to come with fondness. Who is to say that some other tragedy, like the loss of the 755 pictures in my iPhone "camera roll" now, are not going to be lost forever? Except the few that I have uploaded to this blog, the rest are gone forever. And it seems to me also that with the modern fetish for "selfies," and junk photographs, uploaded daily to social media which get a quick "like" from friends; the memories most people have of life are cheapened significantly. You can say the same about e-mail. I visited a friend of mine in London some years ago who shewed to me a letter, dated, I think, 1991. It occupied a physical space, was preserved with care against dust and wear, and was quite old. I have no e-mails now beyond the year 2012 (due to another technological tragedy), and albeit I have tried to go through the best of them, and saved them, printed a few, it's just not the same as a one-and-only, kindly epistle from some distinguished person who can write decent prose in good will. We're entering a very ethereal, unreal future. To what extent is the Internet real?

Perhaps Fr Chadwick might say that this has some Gnostic influence? I don't know enough. But I do know that I was somewhat envious of my grandmother who had all those old cards and pictures.
Posted by Patrick Sheridan at 9:35 pm
Email ThisBlogThis!Share to TwitterShare to FacebookShare to Pinterest