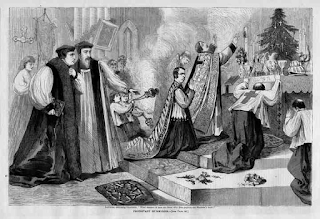 The Papal communion is fundamentally ridiculous. If it was standing at railway stations asking for money nobody would give any. And you may say that this series of posts on the latest "apostolic" exhortation has nothing to do with me but it seems a little bit sad for anybody, and not just anybody but a respectable, intelligent priest, to sift through magisterial documents with a view to choosing what to believe and uphold, and what to discard like an old newspaper. It's ludicrous! Nobody with even half a wit can be taken in by what Rome says, and the people who genuinely believe it are without exception unbelievably shallow. What holds the Papal communion together? Stupidity and tribalism seem to me to be the only two things for most Roman Catholics. Converts? Well, you just have to wonder why they would reject some fatuous document with the word "apostolic" tagged onto it if they don't actually believe everything from start to finish, top to bottom, and everything in between. What do they believe? What do they really want? Because it seems to me that such people have chased a fool's fire to the ends of the earth only to find that the sea has no shore, the grass is not greener, that their imagined utopia, the perfect society on earth, is just as spurious as the Church of England. They don't like it, in fact they hate it, but they're desperate to justify its existence by salami slicing off bits that they don't like and vainly imagining that the old temporal power will return, that some future pope will don a triple crown and celebrate a 1962 mass, and that some goddess' "immaculate heart" will prevail. It won't happen. The barque of Peter is a sinking ship. Get out while you can!

Of course you know that people despise your opinions when they don't even acknowledge or review what you say.
Posted by Patrick Sheridan at 2:07 pm
Email ThisBlogThis!Share to TwitterShare to FacebookShare to Pinterest