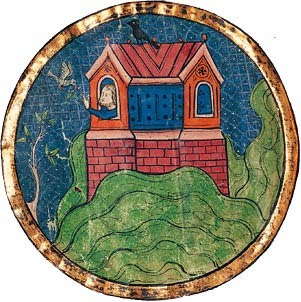 I'm low on blog post ideas so these ramblings will have to do...
I have always wanted to visit Turkey, as much as Italy (for the Grand Tour no less!), Greece (I went to Corfu in 1993, if that counts?) and the Holy Land, but one curse of being an illiterate University drop-out is that you are reduced to humiliating and degrading employment, and getting pittance for it. And so the opportunities of going anywhere beyond the last stop on the 492 bus route are closed unless I want to spend way beyond my means (my mother told me, in her characteristic ''told you so'' tone, after I had spent £4,000 in savings,''your lifestyle exceeds your income''). This is fair enough, and I am paying the price now, but I would like to experience something old and foreign outside of my books.
As a good Catholic boy (going to Mass on Sunday not once but twice!) I always imagined that the Holy Land and Rome were the mothers of the Church and of civilisation. The Gregorian missions may have set out from Rome to convert the Saxons, but they brought not with them a Roman faith (although they spoke the hard tongue of the Romans, and the faith had a sort of Roman veneer), but one shaped in Asia Minor. Turkey is truly ancient and central to the Classical world. Noah's Ark would have foundered but for the highest peak in Turkey (this depends, of course, upon how you read: Requievitque arca mense septimo, vigesimo septimo die mensis, super montes Armeniae). The Argonauts sailed the northern coast of Turkey to Colchis in their search for the Golden Fleece. The Hittites, who sold Abraham a tract of land, dwelt in Turkey and conquered Babylon and but for the tides of history would have provided a dynasty of Pharaohs. Two of the Seven Wonders of the ancient World were built in Turkey - the Temple of Artemis at Ephesus, and the tomb of Mausolus at Halicarnassus. It was here that St John wrote the most beautiful of the Four Gospels (in my opinion), and St Mary, of whom was born Christ the Saviour (what praise could one say more?), laid down her head to sleep at last. St Paul wrote most of his Epistles to the great cities of Turkey, and it was in Turkey that the great Ecumenical Councils were held. It was at Nicaea and Constantinople that the holy fathers drew up the Creed we sing during Mass (minus the F word, added later at Toledo and without the consent of an Ecumenical Council), and at Ephesus the holy fathers anathematized any who should add or take away from the Creed. At Chalcedon in AD 451 the holy fathers acclaimed the Tome of St Leo and expounded the orthodox Christology, and at Nicaea the heresy of Iconoclasm was finally stamped out.
What of Rome though? Rome was for long a great bastion of orthodoxy and Tradition. It was long the custom (before Constantinople muscled its new head in at Chalcedon - I still do not recognise Canon 28!) for not only Western sees, but for Antioch and Alexandria (because of the Petrine links??) to make appeals to Rome rather than Constantinople, which was a relative newcomer, and not even an apostolic see. During the Iconoclast period, Rome (and the West generally) was a safe haven for those who clung to the orthodox faith. But alas, alas for modern Rome! I would now only visit Rome to further my classical education...(the Grand Tourists were often profoundly disappointed with Catholic Rome).
I'm bored with this post now, and it has long ceased to follow any clear course or have any meaning, so I am going to get some lunch. Do take the time to watch the Commencement video on Fr Finigan's blog. It is so nice to hear the correct pronunciation of Latin for a change! Moreover I was amazed at how much I understood. When I learned Latin, I received the classical fashion of pronunciation (that employed in the video), and so when I first encountered liturgical Latin (at an Anglican Benediction when I was 15) I thought that it was very strange - I still do! My dear Latin teacher taught us that v's were pronounced as semi-vowel sounds in ancient Rome, hence the ''w'' sound. I think that the Church (at least north of the Alps) should adopt this mode, shaking off the Romanism and centralization of Pius X (whom I don't regard as a saint by the way...) - I mean, it's not as if your average parish priest in Medieval England pronounced Latin as they did in the Roman Curia!; although it is interesting - I wonder if, in Rome, during the bleak period when Romance languages were developing, whether Latin was pronounced in the modern Italian fashion? Food for thought...
Posted by Patrick Sheridan at 1:08 pm
Email ThisBlogThis!Share to TwitterShare to FacebookShare to Pinterest