Thought for the day... 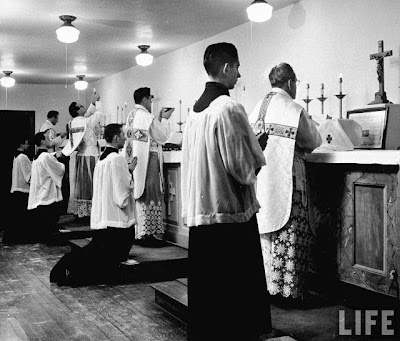 Low Mass developed in the Middle Ages largely because of theological speculation and replaced the older tradition of concelebration. Low Mass has thus had far-reaching liturgical and theological consequences, and its effects even ran into the Sacred Canons and church architecture. It is because of Low Mass that we have side Altars in churches, the Missal and Breviary (which are ''compendiums'' of older liturgical books), the fact that the Celebrant reads everything at High Mass, and probably a ''code'' of Canon Law as well. The ''speculation'' was along these lines: each Mass as a propitiatory sacrifice has a particular value before God, therefore two Masses are better than one.
Now we have already seen that it is because of Low Mass that we have Missals and Breviaries, side Altars etc, but the effects of Low Mass run much deeper than this. The fact that the Diaconate was seen until recently (that is, the last 43 years!) as a stepping-stone to the priesthood is probably a residue of the ''Low Mass mentality'' - since Deacons are seen as liturgically superfluous during Liturgy, what is the point in having Deacons at all? Even during High Mass the role of the Deacon (summarized by O'Connell as to minister immediately to the Celebrant) is comparatively trivial compared with his role in Eastern Liturgies, and my supposition is that in the Early Church in the West the role of the Deacon was more or less consonant with his role in the East - that is, not only to minister to the Celebrant but to safeguard the participation of the lay people as well - even, dare I say it, to act as a sort of ''bridge'', that is, to bridge the gap there is between the priesthood of the clergy and the common priesthood of all the People of God. The general thrust of the modern ceremonies of High Mass (by which I mean High Mass as it was before the pontificate of Pius XII - I don't discuss the new liturgy on this blog) are directed towards the solemn function of the Celebrant, with the functions of the Deacon and Subdeacon as merely enhancing the dignity of the ceremony (what does the Subdeacon do other than chant the Epistle and stand in medio with the paten and humeral veil!) and an affectation. The fact that the Celebrant reads everything is indicative of this mentality.
I wonder if this all ties in with the unbalanced cult of the Blessed Sacrament in the West? Low Mass clearly runs contrary to the Office, and therefore to the detriment of the Sacred Liturgy altogether. What is the point of the Office when the persons required to sing the Office could each be whispering from a book at a side Altar, and after the magic words elevate a white disc (it's not even real bread) and hold It aloft for minutes on end for the adoration of simple, aliturgical folk? It is this unbalanced, speculative mentality which produced Benediction, trivialised the role of the Deacon, enhanced beyond his vocation the role of the Priest (and therefore the Bishop, who has the fullness of sacramental orders - and consequently the Pope, who is seen as some kind of super-bishop), and the minimalist, Scholastic reasoning behind it all produced a scenario in which Liturgy itself no longer matters but rather bare sacramental validity. The lay people at Mass have no connexion to the Sacrifice and so either they are just left kneeling, counting beads (to supplement and compensate for their alienation), or (like me during Low Mass) their minds wander off into trivial things. I took my father to a Low Mass once and afterwards he complained that it was boring - I know exactly what he meant! I imagine that if Low Mass were the norm for a Sunday Mass in a parish church in the late 1950s, no wonder they desired reform.
Low Mass is, therefore, a liturgical abuse. It should never have been recognised by the Church as a normative and acceptable form of Liturgy.
The above photo is amongst the most distressing things I have ever seen...
Posted by Patrick Sheridan at 3:23 pm
Email ThisBlogThis!Share to TwitterShare to FacebookShare to Pinterest