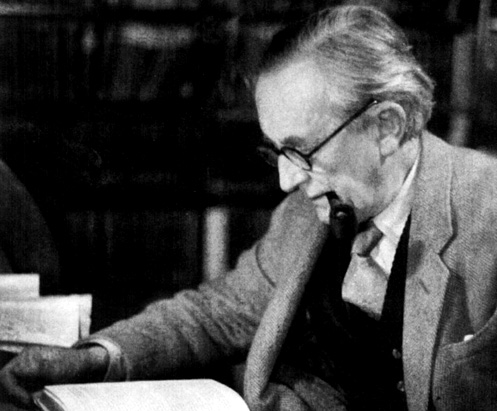 This is part two of my series against the latrocinium cheerfully welcomed by Rorate Caeli who, incidentally, declined to publish part one because I am not a "traditional priest." Before we continue, it is incumbent on me to advise you against setting a very high store by many of my conclusions (though not about Rorate Caeli). Where I can discern a number of patterns in Tolkien's work which, to me, reflect themes in other literature or the Sacred Liturgy, these are purely my own speculations. I think you do as much violence to the integrity of the legendarium as the anonymous priest if you go about saying, "well, this theme here can be traced to such and such a theme in some other work, so clearly it means this, it can only be interpreted in this way." If you go down that route then the inherent quality of the work is no longer there, or is at least compromised; you have, effectively, reduced Tolkien's work to a blank sheet (and what did Saruman say about white?), the stimulant of attributive concepts and qualities made by people who are not writers and lack Tolkien's demonstrably fecund imagination...conceptual art, anyone? During the negotiations for the Swedish translation of The Lord of the Rings, for example, Tolkien was very dismissive of the conclusions drawn by Dr Ohlmarks about much of the work, who at one point suggested that the Ring was, in a certain sense, der Nibelungen Ring, to which Tolkien said: "both rings were round; there the resemblance ceases." In other words, take care when drawing any conclusions about Tolkien's work lest you miss the point completely! 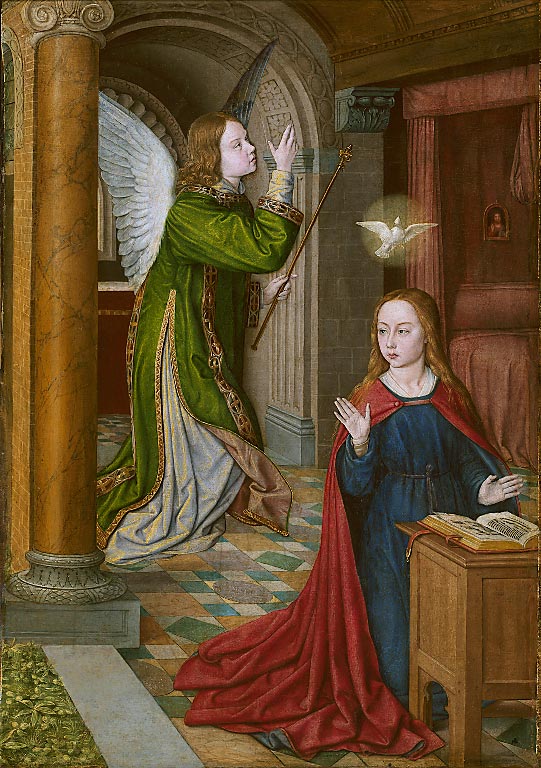 We cut off part one of this series with the question: "if they find the participation of finite beings in creation so objectionable, why do they allow for the participation of a human being in the work of redemption?" I mean, of course, St Mary the Virgin and her fiat. It is behoveful to remember that in addition to St Mary's physical motherhood of Christ there was also a strong moral element to her participation in the Incarnation; she became Θεοτόκος of her own volition. St Bernard of Clairvaux (1090-1153), renowned throughout Christendom for his strong Marian piety, places the highest emphasis upon the contingency of St Mary's response to Gabriel in a beauteously composed sermon on the Annuntiation:

Since you have heard joyous and glad tidings, let us hear the joyous reply we long for...The angel is waiting for your reply. It is time for him to return to the one who sent him...The price of our salvation is being offered to you. If you consent, we shall immediately be set free...Doleful Adam and his unhappy offspring, exiled from Paradise, implore you, kind Virgin, to give us this answer...For it the whole world is waiting, bowed down at your feet. (Quoted in Boss, Mary: The Complete Resource).

St Mary was a girl of about fourteen summers! Pure and chaste nonetheless she represents sinful humanity and her fiat is the zenith of a moral point that echoes throughout Scripture, as it does also in Tolkien, that God's power is revealed most potently in human weakness. In Tolkien we find this in many places; Melkor, for example, "arose in might" before all ages but was at the end of the First Age reduced to a state of impotence; and, most famously, the passing of two hobbits into the fastness of Mordor bearing the peril of the world. And so, coming back to the Great Music, I put it to the latrocinium that the minstrelsy of the Ainur is not some pernicious heresy but a clear reflection of this scriptural idea. If redemption in Christ is seen as creation anew requiring human consent then I daresay the subcreative activities of the Ainur, channeling ideas reflected in the divine mind, can be seen in the same way. God brings to perfection his design through the Ainur and Melkor in unison. In the Lost Tales, Tolkien has Eru say:

Through him [Melkor] has pain and misery been made in clash of overwhelming musics; and with confusion of sound have cruelty, and ravening, and darkness, loathly mire and all putrescence of thought or thing, foul mists and violent flame, cold without mercy, been born, and death without hope. Yet is this through him and not by him; and he shall see, as ye all likewise, and even shall those beings [Elves and Men], who must now dwell among his evil and endure through Melko misery and sorrow, terror and wickedness, declare in the end that it redoundeth only to my great glory, and doth but make the theme more worth the hearing, Life more worth the living, and the World so much more wonderful and marvellous, that of all the deeds of Ilúvatar it shall be called his mightiest and his loveliest. 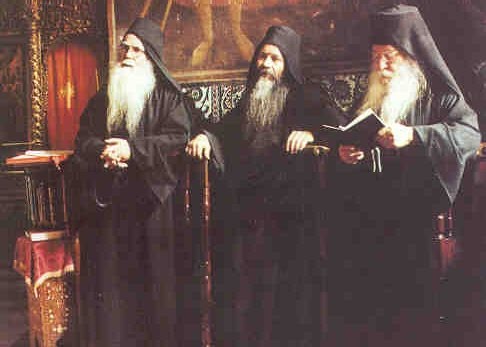 While the discords of Melkor in the Great Music were a thing grievous of themselves, arising in a great tumult to assault and swallow up the theme of Eru, they actually supplemented and harmonised with the theme, doubtless against the will of Melkor. I guess that was Tolkien's answer (in Middle-earth) to the problem of pain - O felix culpa, anyone? The object of the Ainur was moral obedience, attuning their song to the divine theme; Melkor's was power and domination, in defiance of that theme, and therein lies their share in the divinity of God and his humiliation. In a way, it reminds me of what Christ said about having faith enough to move mountains (Matthew 17:20).

We have seen how The Music of the Ainur held a moral quality for each Ainu relative to creation. How, then, can we relate the divine musick to the collective creative activities of the Ainur in a liturgical sense? Faithful practitioners of the Sacred Liturgy, and they are few, will understand that what they do is conduct of the highest order, even heigh stile (as Chaucer might say). Be that as it may, one could ask what is the purpose of Liturgy? The essence of liturgy is the Tradition of the Church (and vice versa), and I mean not some dogma, defined by a pope, and a set of prayers composed by a committee to be a deliberate profession of that dogma; I mean the plainsong melodies of the Roman Gradual, a collect as old as Christianity itself, and St Matthew's Passion narrative sung in full on Palm Sunday, traditions that quickened our Catholic forefathers in faith. Put simply, Tradition is the Memory of the Church and the purpose thereof is to realise Christ's ordinance, This do for a commemoration of me. We do thereby proclaim the reality of Christ's Incarnation, ministry, Passion, Death and Resurrection and his promise of the Paraclete. Memory, manifestly "waking memory" and equivalent of tradition, goes to the heart of Tolkien's legendarium. In The Lord of the Rings Tolkien differentiates between two kinds of memory; the memory of lore and antient tradition in the House of Elrond and the living memory of the Elder Days in Lothlórien. The perception of Frodo and Sam is noteworthy:

The others cast themselves down upon the fragrant grass, but Frodo stood awhile still lost in wonder. It seemed to him that he had stepped through a high window that looked on a vanished world. A light was upon it for which his language had no name. All that he saw was shapely, but the shapes seemed at once clear cut, as if they had been first conceived and drawn at the uncovering of his eyes, and ancient as if they had endured for ever. He saw no colour but those he knew, gold and white and blue and green, but they were fresh and poignant, as if he had at that moment first perceived them and made for them names new and wonderful. In winter here no heart could mourn for summer or for spring. No blemish or sickness or deformity could be seen in anything that grew upon the earth. On the land of Lórien there was no stain. (The Lord of the Rings, Book II, Chapter VI). 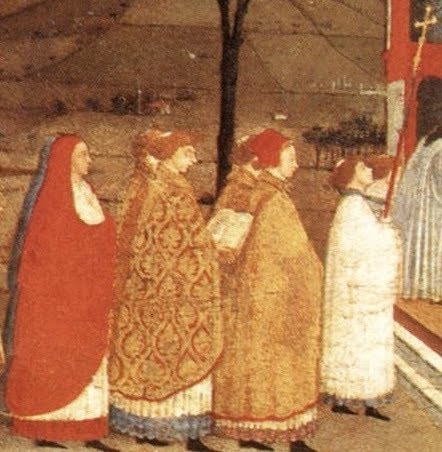 Sam appositely described his experience as like "being inside a song," which Haldir attributed to the power of Galadriel (symbolised by Nenya, one of the Three rings). Tolkien often employs Sam, the simple hobbit, to convey high truths or a sense of storial depth. The words were well chosen for the song, of course (though Sam does not know it), is the Great Music itself and the echoes of that primeval chorus that men of good will can hear in the stuff of earth, the water of the sea and the winds of the air. Similarly, in antient days Yavanna approached Manwë and spake of the unity of creation and the trees who lifted up their branches and sang to Ilúvatar amidst the rain, redolent of 1Chronicles 16:33, Then shall the trees of the wood sing out at the presence of the Lord, because he cometh to judge the earth. Tolkien goes on:

Then Manwë sat silent, and the thought of Yavanna that she had put into his heart grew and unfolded; and it was beheld by Ilúvatar. Then it seemed to Manwë that the Song rose once more about him, and he heeded now many things therein that though he had heard them he had not heeded before. And at last the Vision was renewed, but it was not now remote, for he was himself within it, and yet he saw that all was upheld by the hand of Ilúvatar; and the hand entered in, and from it came forth many wonders that had until then been hidden from him in the hearts of the Ainur. (Quenta Silmarillion, chapter II). 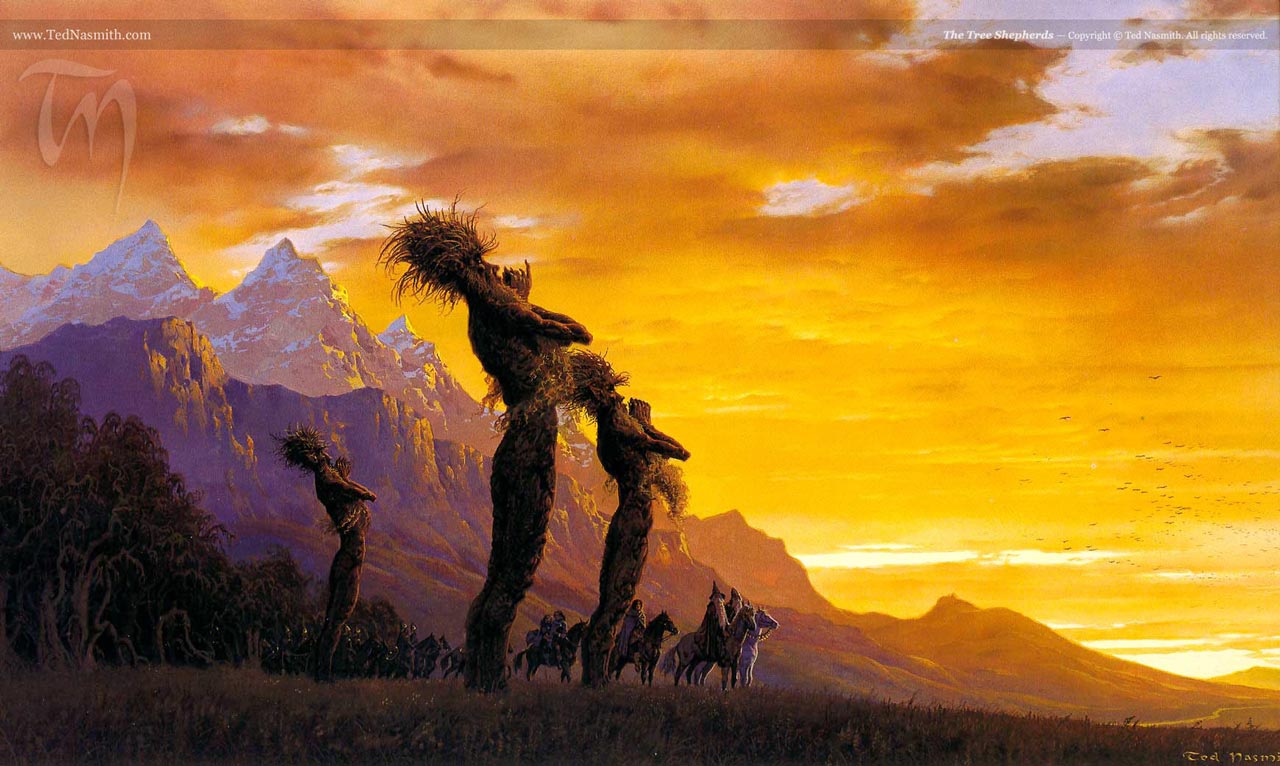 Ted Nasmith's rendering of the Shepherds of the Trees.

As in faithful ministry of the Sacred Liturgy on earth to reflect that perfect liturgy celebrated triumphantly in God's presence in Heaven, it is Manwë's memory and interior disposition towards God that makes the Great Music present for him. The faithful remembrance of that divine chorus by the Ainur collectively, then, takes on the character of a liturgical anamnesis to make God's ordinances present on earth. By doing so, Tolkien says that their minstrelsy is upheld by the hand of God, his hand enters into their chorus and brings forth many wonders. And so, as in times past, we might endeavour to reckon our celebration of liturgy in modern times. Do you understand this argument? Or are these ravings?

To be continued...
Posted by Patrick Sheridan at 9:00 am
Email ThisBlogThis!Share to TwitterShare to FacebookShare to Pinterest