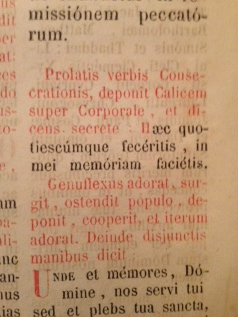 This is my own translation of the text and rubrics of a small part of the Roman Canon. Text in italics:

"Having uttered the words of consecration, he places the Chalice upon the corporal and says discreetly: As often as you do these things, you shall do them for a commemoration of me. Having bent the knee, he worships [the Sacrament], he gets up, he shews it to the people," etc.

The text is taken from my 1862 Missale Romanum and contains the rubric familiar to "traditional" priests. However, if we look to a 1576 Belgian edition of the Missal of Pius V there is a slight variation in the rubric. 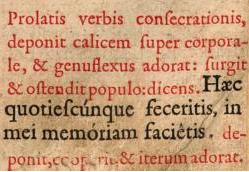 As you can see, the rubric directs the celebrant even so:
"Having uttered the words of consecration, he places the Chalice upon the corporal and bending the knee he worships [the Sacrament], he gets up and shews it to the people, saying: As often as you do these things, you shall do them for a commemoration of me. He places it on the corporal and worships again."
You may ask when did this change come about and what is its significance? Well, the change was made during the Clementine reform of the missal and was published with the bull Cum Sanctissimum on 7th July 1604, a mere thirty-four years after the publication of Quo Primum. Fortescue tells us that the reform was instigated merely to rectify a few textual corruptions that had "crept into" the missal of Pius V and that "they did not in any way revise the Mass." This is a fantastical notion given that the missal of Pius V was, essentially, the Roman missal of 1474, and it's hardly likely that the change in the rubric was a mistake. Even so, however the change came about, it is an important one. The Tridentine rubric orders the celebrant to utter the words of Christ as he elevates the Chalice, symbolising oblation of the Eucharist as well as veneration. The post-Clementine rubric mandates silent veneration only, and that after the words have been spoken. And what does that symbolise? Well, quite simply that oblation of the Eucharist comes second to veneration. I would say that in the missal of Pius V was the last remnant, almost lost amidst a hodgepodge of silly up-down, up-down manoeuvring and various breaks and stops, of an older praxis. Put simply, the very subtle shift in this rubric symbolises the triumph of transubstantiation over tradition.
It really is quite simple. Here is the empirical evidence, in black and red, that the Canon of the Mass was not so grand as to be beyond at least some degree of reform prior to John XXIII's addition of St Joseph, but who is interested? Just a few eccentrics like me. If this post were read by a traditionalist they'd have a host of excuses at hand. The missal is a forgery (never mind that forging books is incredibly expensive!), it's a Janensist missal, I am mistaken or, worse, I am telling deliberate lies and presenting them as scholarship! This last is the most likely. Clearly, I have gone into the British Library and photographed an old missal and gone out of my way to superimpose the rubrics of some other part of the Canon over the real text in question just to try and prove a point. Yes, that's it. After all, Patricius is a heretic, and heretics are damned to Hell because they go about re-inventing history to support their erroneous worldview. Yes, it must be a lie because the Canon is unchanged since antient times. Jesus Christ said the Canon with the Disciples in the upper room, and St Peter was there with his tiara, the same one we hoped Benedict XVI would bring back. Hermeneutic of continuity in action! Other Eucharistic prayers are venomous and we secretly think they're invalid. You have to say the words of institution or there's no transubstantiation...
And blah, blah, blah. The evidence is there for those who are willing to make up their own minds. If you do not accept the evidence then, I'm sorry, but there's something wrong with you.
Posted by Patrick Sheridan at 9:00 am
Email ThisBlogThis!Share to TwitterShare to FacebookShare to Pinterest