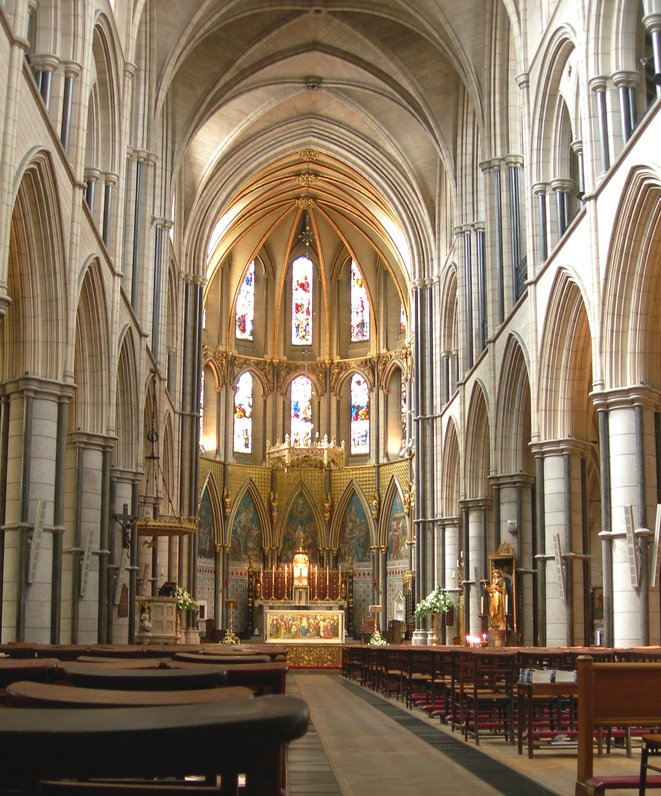 I think that in order to pass the time I shall declare war on those women who cling to the clergy like leeches, follow them around like puppies and generally suck the life out of any decent parish. Fr Hunwicke has been writing about female modesty over the past few days so maybe this post (or posts) can be considered a less erudite, more rancorous appendix to his posts. Naturally, the decline of female modesty has its uttermost origins in universal suffrage and the Victorian ideal of marriage.* But declare your opinions on female suffrage to women of this sort at your peril! For women of this sort claim a sense of tradition unto themselves, yet...well, we shall see about any "yet's" in a moment.

You know exactly who I am talking about; they're everywhere! They go about with an air of superiority, they tend to be on the chubby side and have very domineering characters. This one shews up for Mass half an hour early, spends some time in "prayer" (so as to seem pious, "that they might be seen of men..."), and then marches into the sacristy to cause an argument with the kindly, long-suffering, elderly server with arthritis who has been in the parish since before the monstrous woman was even born. We'll call them Sue and Frank, for convenience. Sue doesn't like Frank for several reasons. One, he is biologically male and not a priest. Two, he has a sense of "parish" and won't migrate all over the place for artificially-traditional liturgies put on by the Latin Mass Society. Three, despite Sue's self-professed "traditional" disposition, Frank in fact knows a lot more than her and she is very aware of it. And four, he doesn't really care much for taking sides in a perceived "civil war" in the church. He loves his church, he has a good store of his own wisdom and he considers it his vocation in life to serve his parish. In other words, he isn't as vocal as Sue in voicing his opinions about gay marriage and would rather die than protest outside an abortion clinic.

It is a Monday evening in the Summer. The old man unlocks the door of the church and goes into the sacristy. He takes off his jacket and puts on his cassock and a fine linen surplice he himself made, being a man marvellously skilled. No lace ornamentation in sight! He goes about the routine, so familiar after so many years, of preparing for Mass. Moments later he hears somebody else walk down the nave of the church and a set of keys rattling. He then rolls his eyes, remembering that it was "her" turn to open the church. He sighs and carries on. Sue walks into the sacristy and smiles unconvincingly at Frank. "Good evening," he says.

"Excuse me, Frank," she says at length. She has been fiddling around suspiciously in one of the sacristy cupboards for a few minutes, poking about for something she thinks has gone missing. She then turns to the old man with a face like thunder. "We don't use that missal stand for the six o'clock weekday low Mass at the Lady altar. Put it back and get the other one!" Then hobbles the old man to the sacristy cupboard to do as she says. He proceeds to take an old, perhaps the oldest, missal from the cupboard over the vesting table (ignoring the missal on the table) and makes his way back to the door. He turns the door handle and then comes a voice to rend the very will.

"Err, where are you going with that?" He turns and looks at the woman, both hands on her hips and a look that would curdle new milk on her face, pursed lips and all.
"Well, dear, we mustn't forget the commemorations!" Says the old man. His tone is that of a kindly-heart aggrieved by injuries undeserved. He's probably an old queen.
"What commemorations?" asks the woman. Not only was it her turn to open the doors of the church but she has come especially early to sort commemorations out too. She has recently learned how to navigate a 1962 missal by herself (with constant assistance of the parish priest, whose Latin is at least minimal), and, taking the red 1962 missal with the embossed pentagram, she had set the missal at the Second Sunday after Pentecost the day before. Frank had ignored this for he had remembered the Octave of Corpus Christi and tried to explain, but it availed him not.

"Oh no, we don't do commemorations on weekdays, Frank. It's hardly expedient with so small a congregation. Now, I won't tell you again; put the missal back and use this one." She rolls her eyes, turns her back and sets about preparing the chalice.
"Well, what about the vestments?" asks Frank. "It's white to-day."
"No, it's green. The ordo says so," says Sue, not turning.
"No, actually the pre-'62 ordo stipulates white. It says so here." He reaches for the St Lawrence Press Ordo and points to the feria secunda. Sue seldom looks at this ordo because she was never taught Latin at school.
"It doesn't make any difference. And I wish you'd stop interfering. We'll see what father says when he comes in." Frank sees no better option but to leave the sacristy and wait in the church.

Presently the parish priest walks into the church and genuflects. Frank returns to the sacristy and sees that the white vestments that he had laid out have been replaced with green and that the red '62 missal is open for the priest to look over before Mass. Father walks in and says "good evening all." Frank helps the priest to remove his coat.

"Now, father," begins Sue. "There's been an awful misunderstanding. I've gone to all this trouble to set things up for Mass and Frank comes in and starts changing everything without a word of explanation!" From this moment Sue's accustomed grimace of hatred turns to a look of smug satisfaction.
"Father," begins Frank. "It's merely about the vestments and commemorations. You see, we are within the octave of Corpus Christi..."
"Well, it's too late to change everything now," says the priest. "Mass starts in five minutes." He takes no more notice of Frank and vests for Mass.
"Thank you, father," says Sue with a smile. She leaves the sacristy and closes the door. I expect that the priest taking Sue's side rather than Frank's was just a case of knowing which side his bread was buttered. Frank was old and losing his capabilities. Sue was...well, not young, but she could drive a car and be counted upon to leave work at an hour's notice and drive the priest wherever he wished to go. Sue, the monstrous sycophant, was the future of the parish. Frank, the conscientious old man, was the past.

* (If only one party is expected to be happy [the male one], as in a Victorian marriage, what's so very wrong with that? Then comes a kind of marriage where both parties are expected to be happy and you've only got to want the bathroom window open and your wife wants it shut...then comes [a newly-made legal] divorce. Etc, etc,).
Posted by Patrick Sheridan at 9:00 am
Email ThisBlogThis!Share to TwitterShare to FacebookShare to Pinterest