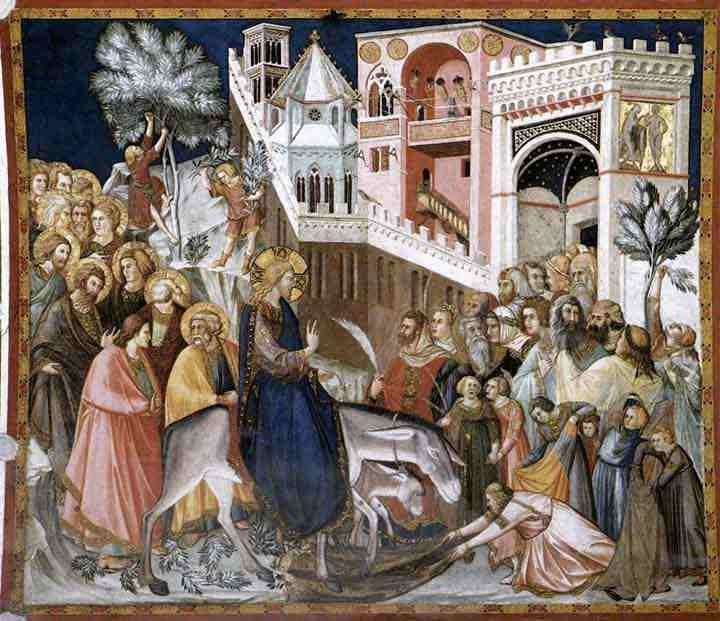 I have transcribed here an Old English sermon for Palm Sunday, translated into "modern" English in 1868 by Richard Morris, an Anglican divine and philologist. I have my own copy but for those of you who haven't, Old English Homilies and Homiletic Treatises, from which the text below is derived, is available in Google Books here. For those of you who are interested in the Ancrene Riwle (which Tolkien translated), an old monastic rule, there is a beautiful section in this volume about the "wooing of our LORD," which is a treatise on love with obvious parallels with the Song of Songs, and in which the spouse is either the Church or the pure soul. Whosoever said that English is inapt for the liturgy is a fool! Now the sermon:

Quum appropinquasset Iesus Hierosolymis, & cetera. Good men, it is a holy day to-day which is observed every twelve months. The gospel tells how the Saviour came nigh towards the city of Jerusalem to-day, with his apostles, and also with other companies of men. When he came to the hill called Olivet, then sent he his two disciples, saying to them, Go unto the city that is over against you and ye shall straightway find there an ass bound with her colt, unbind them and lead them to me. If any man saith ought to you, say that the LORD hath need thereof, and immediately they shall let you depart therewith.

Euntes autem discipuli fecerunt sicut praecipit illis Iesus, &c. The apostles went and did as the Saviour had commanded them. They took the ass and her colt and led them to him and put their clothes upon the foal of the ass, and our LORD, afterwards, rode thereon up towards Jerusalem. When it was known all over the city that the Saviour was come thitherward then ran towards him all the Hebrew men, some with good hearts and others with evil intentions. Many of the multitude that had previously followed our LORD and also (the faithful of the city) those who believed upon him, took their clothes, and the best they had, and strewed them under the ass' feet, in the way wherein the LORD rode, for love and honour of him. The other men who had no garments climbed upon goodly trees and took the twigs and blossoms thereof and put them under the ass' feet and bestrewed all the path in his honour.

And all the Hebrew folk that went behind and before him sang this song of praise specially for his honour, thus saying, Hosanna filio David, benedictus qui venit in nomine Domini; that is, He is blessed he that cometh in the name of the LORD. Thus they praised him until he rode in at the east gate of the city that is still called Speciosa porta, that is the fair gate, as it is still called; and since Christendom was never over twelve months it is opened. But to-day all the people went forth in procession to Mount Olivet and also into the temple. Now, dear brethren, I have in the first place repeated to you the gospel, now ye shall understand secondly what it betokens. Ye heard erewhile in the gospel how our LORD sent two apostles, Peter and John, towards the city that they should unbind the ass, and her foul with her; and how our LORD sat upon the foal of the ass. Dear brethren, ye have heard how much humility our LORD shewed for us. He might ride, if he desired, on rich steeds, and palfreys, mules and Arabs, but he would not, nor even upon the big ass, but upon the little foal that was still suckling; nor had ever borne any burden, nor had ever been defiled by any other ass. In so great humility did God Almighty place himself for us, and moreover set us an example, that when we have wealth in abundance in this life be ye not therefore proud, nor wild, nor stark, nor wayward, nor highminded; but the greater the prosperity we have in this life, the meeker ought we to be, and the more temperate, as if it were not our weal, and thank our LORD for it who hath given it us, and give thereof to those men who have it not.

Good men, when the believing Hebrews went and strewed with twigs the LORD's path wherein he rode, then was fulfilled what Isaiah the prophet foretold many hundred winters ere this should be, thus saying, Parate viam Domini rectas facite semitas eius. Raise up the LORD's way and make his paths straight.That betokeneth that we shall incline our hearts and have good belief towards our LORD. The prophet commanded that we should make his paths (straight); we make them straight if we keep his commands, and if we are under true confession (shrift); and are God-fearing wholly in all things; and if we each of us have love among us one toward another, as if we were brethren; and if we thank our LORD for all things that he sends us, the good and the evil; if we do this, then do we make right and clean God's ways and his paths that God may ride therein. If we do this then will God Almighty dwell in us. Also I erewhile said how, when our LORD rode to Jerusalem, the Hebrew folk sang their song of praise in honour of our LORD. Some sang it through the Holy Ghost, whether they would or no; and the children played in the street praising our LORD and said Hosanna, filio David. David, the psalmist, foretold this in the psalter long before, the while he lived, and said ex ore infantium, et lactentium. He prophesied this of our LORD through the Holy Ghost. "LORD, out of milk-drinking children's mouths thou bringest forth praise; thou castest down the old enemy because of thy foes, and thy foes thou avengest."

Now we will say more as to what this gospel betokens: the city which was over against the Saviour's two disciples betokens this world, which is transitory and evil, and very treacherous and irksome. Toil thou ever so much, always shall it be undone; and sometimes divers storms come, and war, and famine, and disease of body, all for our guilt; and when thou weenest that thou shalt live best of all, then goest thou forth (diest) and another cometh; wherefore let no man trust too much to this life. She deceiveth us where we least suspect. We are not born to have pride, nor even any other vanities; but we are in this life that we might earn the eternal bliss in the kingdom of heaven. Ye have heard how God Almighty sent his apostles towards the city after the ass' foal which was bound, and afterwards unbound. The apostles denote the teachers, that is the wise teachers who are now over holy Church and lead a spiritual life; and they shall ever unbind God's people from the devil, and tell them God's lore; and how they shall lead their lives and earn the everlasting bliss through prayer and through shrift, repenting with fasts and with alms; and pray for them day and night that Christ may have mercy on their misdeeds.

The ass denotes the Church, or the synagogue; she was bound under the old law, and now is she unbound under this new law. Good men, learn what this synagogue was in this old law ere Christ was born. Just as the Jews had their synagogue after Moses' laws, so have we now a Church after the LORD's law; and ever on the Saturday Jewish folk came at set time to the synagogue and praised their LORD, according to their law. That was their Sunday, and they kept their day of worship better than we do. Beloved, all the believing Jews who observed faithfully their laws and obeyed their LORD ere he came to this world were called synagogue, just as all Christian folk who keep Christ's behests are now called Church. The ass that was bound and afterwards unbound betokeneth the synagogue that was bound under the old law; that was all the believing folk of the Jews that were strongly bound ere our LORD came to this life. They had different laws to what we have. That was the law then - the same injury that I did thee thou shouldest do to me; and if thou sinnedst towards thy LORD and it became known, neither gold nor silver might avail thee, but they should take thee and draw thee asunder with horses or dash thee to pieces with stones. Wherefore, dear brethren, there is much need that we thank our LORD who hath helped us to fulfil the severe old law with the new. Now no man may atone for his sin with a penalty, but towards Christ alone with shrift, as his priest teacheth him; also with his fasts which quickly overcome the waywardness of the flesh; and church-going, and to do good for the Church, and many other kinds of good works which would take too long to tell you at present.

But how then if a man is so sinful and possessed of the devil that he will not either for his highmindedness, or for his pride, or for the willfulness of his foul heart, observe his shrift? Then forsooth I say unto you that there is no need that anyone here in this life should pray pater noster for his soul, nor sing mass, nor do any other good thing. Ah! how should another man's good deeds profit him who never in this life took thought of any good thing? Ah! who is he that may water the horse and not drink himself? No more may any one do good for their souls who in this life would not begin to do good. Great need have we then, dear brethren, as long as we live in this life, of true shrift and greatly to dread our manifold sins and earnestly to beseech our merciful LORD that he may grant to us so to live in this brief life that we may depart hence to the eternal bliss wherein dwell the Father and the Son and the Holy Ghost, ever without end, per omnia saecula saeculorum. Amen.

There are some interesting themes here. For example, the fulfillment of Isaiah's prophecy: Prepare ye the way of the Lord, make straight in the desert a highway for our God, and the subsequent words about the valleys lifted up and the mountains laid low. This is a prophecy that we usually associate with Christ's Baptism but here it betokens Christ's entry with triumph into Jerusalem which can be said to be, for us, the fulfillment of our baptisms and our own mystical entry into the City of God whereat the Angels give praise. It's very simple and moralistic. Also of note is the comparison the homilist makes between Jerusalem and our own world, which is full of travail and sorrow, but the ass upon which Christ rode in triumph is the Church, which was unbound from servitude to the Old Law and stablished and made fast in the New.

In terms of indulgences, penances and the rest it's interesting to see the Saxon approach expounded here. We are told to greatly dread our manifold sins and to beseech Christ in true shrift of heart, as the priests teach us. Alas, alas that the Normans, under their papal banner, won at Hastings! Alas for the Church! Alas for the English! But as we enter into Holy Week, let us do so with sorrow, trembling and sobriety, remembering that by our own sins and wickedness did Christ's Passion come to pass.
Posted by Patrick Sheridan at 8:00 am
Email ThisBlogThis!Share to TwitterShare to FacebookShare to Pinterest