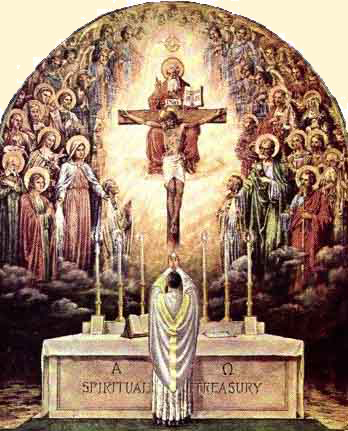 I am as susceptible to flattery as a dragon, I'm afraid, but I agree with everything said here by valued reader Dale (except I would ascribe a certain nastiness to most converts, to whatever religion). This was in response to my own remark that I tend to prefer the Novus Ordo these days to what passes for "Tridentine" liturgy in Traddieland:

"Hello Patrick, yes I find that your understanding of Catholic traditionalists is spot on, well actually, rather brilliant. For me, I would much rather deal one-on-one with those who attend and support the novus ordo (this especially applies to clergy). The traditionalists are nasty and stupid at the same time. Their ecclesiology makes no sense and when one simply mentions that the Pope is personally infallible, with supporting documents from the Council by the way, they start spittle throwing (they remind me of Byzantine Orthodox converts to be honest). Their fixations on Latin and celibacy is truly bizarre; one of their clergy actually told me that married eastern rite Catholic priests are not real priests and that their Sacraments are invalid! My only real advice is to stay far, far away; of course, it took me years to arrive at this simple piece of advice. Their liturgical knowledge is virtually non-existent by the way; they actually believe that they are celebrating the 'Mass of the Ages' and do not even know that their calendar is simply a modern invention post-Vatican II."

The reason I have so unique an insight into the poor traditionalist mind is because I was myself a traditionalist for years and spent most days of the week among them. And so when I tell you what traditionalists think and believe, it is absolutely and objectively true. But the essential difference between me and them was I wanted more. I wanted Tradition. They don't. They just want comfortable nonsense and a feeling of triumphalism over their Novus Ordo enemies; the sentiment, expressed with hideous delight, "I go to a Latin mass!" I saw all those "Latin masses" into which I put so much time and effort over the years as a work in progress; they see them as the ideal and they have no desire to move on to higher things. A priest, on his own, in a pink chasuble for Laetare Sunday is, to them, the quintessence of liturgical orthopraxis and the sum total of all organic liturgical development. That this is in many ways not dissimilar to dressing up a pig in a lace cotta does not enter their imagination at all.

In short: their beliefs (largely based on lies, fables and superstition) are rubbish, their orders are invalid (since either 1947 or 1968, take your pick...but don't the modern priests have fun playing as subdeacons, an order that was abolished before any of them were ordained!), they are ignorant, stident, nasty and, perhaps worst of all, they have no taste. This last can be proven simply by the instance of a woman approaching me and saying, after I had sat grinding my teeth through a Mass in honour of Joseph the Worker, "oh Patrick, wasn't it a lovely Mass!" And she meant that sincerely. I thought better of asking her whether she'd actually shut her eyes and listened to the schola. Well, it comes back to the pig in the lace cotta, doesn't it? The priest goes, oink, oink and lifts up his trotters at the elevation, and hey presto, a valid Latin Mass! We do the hokey cokey and we turn around, that's what it's all about!
Posted by Patrick Sheridan at 9:00 am
Email ThisBlogThis!Share to TwitterShare to FacebookShare to Pinterest