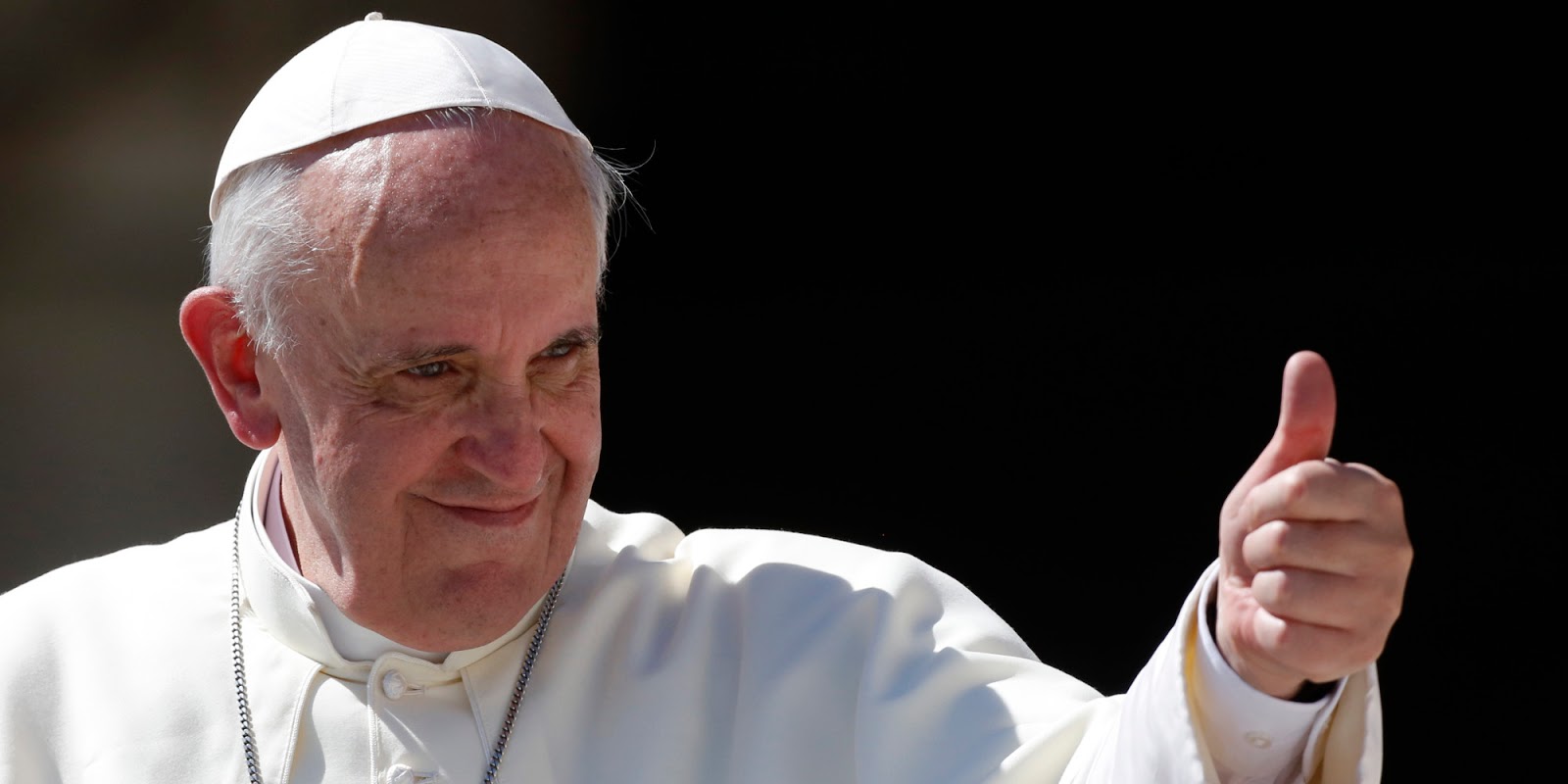 I believe ONE holy catholick and apostolick church...

It wasn't that long ago that I thought all the Roman communion had to do to magically reclaim her orthodoxy was for the pope to infallibly proclaim his own fallibility and then dismantle the Novus Ordo. Then he would take his place as primus inter pares of the bishops of a reunited Christian Church and we'd all live happily ever after. Of course, that's a load of old rubbish. The hermeneutic of continuity has never worked in the direction of orthodoxy! If anything, all Rome can do now, indeed all she is capable of doing, is become more and more aliturgical, more and more cut off from her tradition (and the broader tradition of the Fathers, both western and eastern) and simultaneously more moralistic and just plain weird. I remember during the visit of Benedict XVI to these shores Sinéad O'Connor did an interview on the BBC which, at the time, I shrugged off as cynical nonsense, very much in her manner. I'm afraid I can't find the video on YouTube but she said something about how ridiculous to take seriously an old man in a white dress. And she does have a point, if rather crudely put. The neo-conservatives, with their catechism and rosary crusades, might let on otherwise but Rome doesn't really care in what people believe. If she did, the liturgical experimentations of the 20th century would never have been given the papal stamp of approval. Instead, all that matters is that you are in communion with Rome. You can worship, think, act in any way that you like; just so long as you (nominally) obey the pope. If this is the case, why should we take the old man in the white dress seriously?

And this obsession with acknowledging papal supremacy despite contrary customs and traditions is as old as the hills. At Ferrara in 1438, the Greek acknowledgement of the pope's universal and immediate jurisdiction was a matter considerably more important to Eugenius IV than the Filioque, purgatorial fire or the use of leavened or unleavened bread in the Eucharist. Similar overtures can be read in the encyclical letters of Pius IX and Leo XIII "to the Easterns," in which both popes profess carelessness about the venerable Eastern traditions so long as they exist within Roman jurisdiction. Even in the Latin church itself, and this was brought home to me for the first time in 2007 when, as a traditionalist, I first encountered neo-conservatives with a preference for the "traditional Latin Mass" in a parish setting. I was told that I had the "wrong attitude" because, at that time, I was advocating abrogation of the Novus Ordo and its replacement by the "Old Rite." But I acknowledged papal supremacy so it didn't really matter either way. And this is to say nothing of whether liberals and the traditionalists even share the same faith! But I entreat you all sincerely, is this really the oneness and unity of the Confession of Faith? Because it seems to me that this oneness exists only on paper. And to come back to what I said at the beginning, about the pope dismantling the papacy, what do you think would happen if he did that? We can only imagine but I expect the whole thing would implode, like when Éowyn pierced the Lord of the Nine Riders. One blow and what seemed to threatening and imposing just disappeared. If you apply this principle to the secular realm, like dictatorships, once they are set up, and the defining principle of statehood becomes absolute obedience to the dictator's will, any subsequent weakening of that dictatorship ineluctably brings about the destruction of the state.

If the oneness of the Church then consists solely in obedience to the pope, and it is pretty obvious that the centralized papacy is the only thing that keeps the structure intact these days, is there any hope for the reunion of the churches? Is it not scandalous that competing communions confess the same Creed and yet have entirely different beliefs, not only about the oneness and unity of the Church but all other subtleties in theology and praxis? For Rome, the "living magisterium," papal supremacy is not open for discussion. Take it or leave it. The pope is the pontifex maximus, the guarantor of orthodoxy and the communion of Christ. That this communion is a complete waste of time at the level of peoples' faith and worship notwithstanding, the papacy is actually the most divisive and controversial figure in the entire history of Christianity. In the words of Professor Southern (quoted by Dr Geoffrey Hull):

"In 1453 the papal view of Christendom had triumphed. More than any other force it had been responsible for giving western Christendom an independent existence in the eighth century, and for providing the doctrinal basis for western supremacy from the eleventh century onwards. The movement toward Conciliar government in the church, which might have offered a new path to unity, had in the end collapsed, not least because of the strength of the papacy. So, from the point of view of Christendom as a whole, the papacy was the great divisive force throughout the Middle Ages." (The Banished Heart, p.130).

So much for "bridge-builder."

People often say, stupidly, that Roman Catholicism and Orthodoxy are so similar. They are not similar in any way, except superficially. So in terms of Christian unity, if, as we Orthodox hope, the pope steps down from his lofty position, that won't help at all. He would just leave a vacuum because he is all there is to Roman Catholicism. Pope, pope, pope. Put simply, we don't really want the communion of Roman Catholics because even if they did away with the pope, the damage has been done already. The whole system was buggered by centuries of decadent liturgy, bad theology and worldly king-popes. There is absolutely no hope for the union of the churches. The only way to truly confess the oneness of the Church is to actually personally join that One Church, which is the Orthodox Church of Christ.
Posted by Patrick Sheridan at 9:00 am
Email ThisBlogThis!Share to TwitterShare to FacebookShare to Pinterest