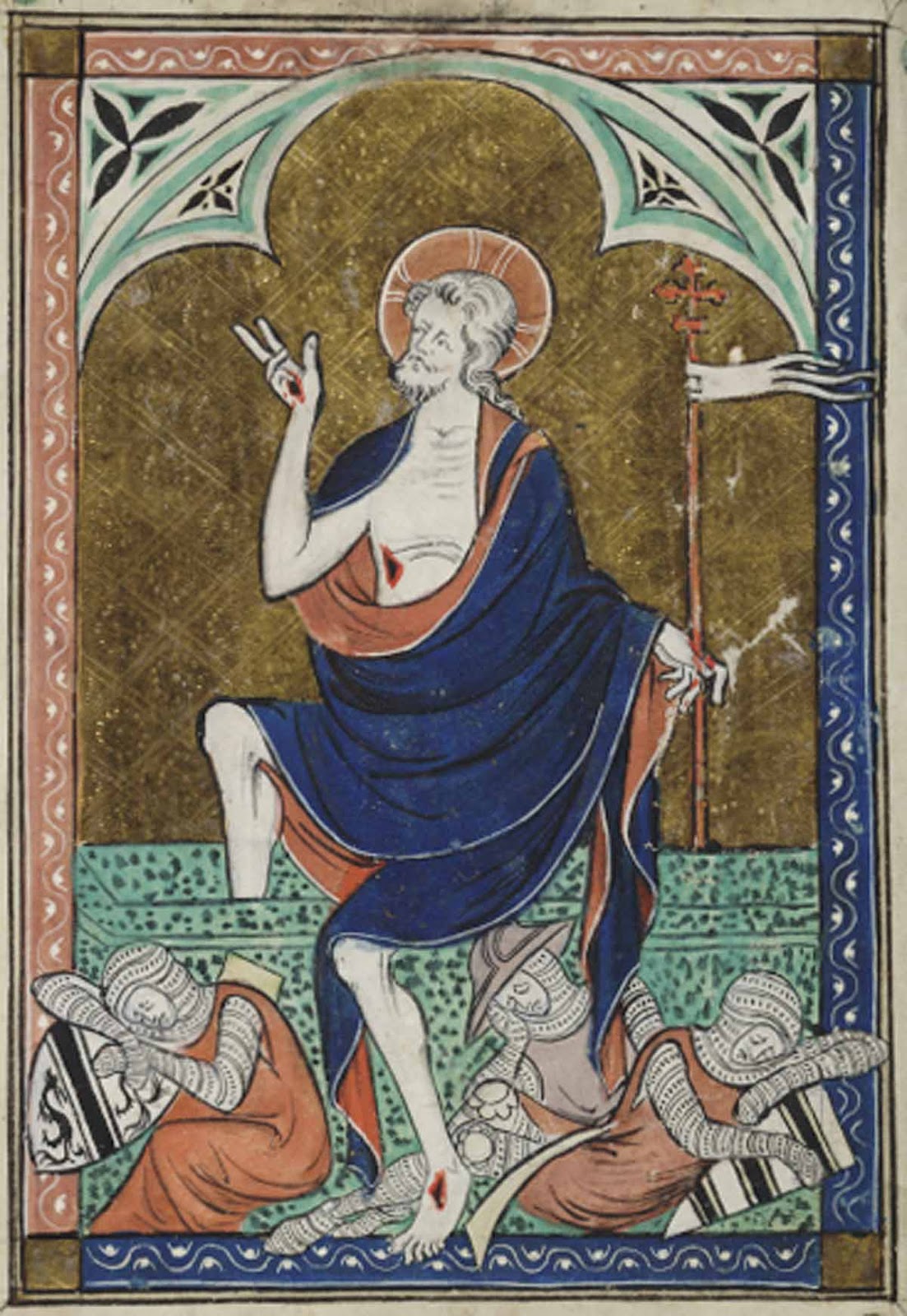 Easter Sunday reminds me of two chapters in The Lord of the Rings; the Field of Cormallen and Many Partings. I think I have transcribed the relevant parts of Cormallen before. At the battlefield of Dagorlad on the twenty-fifth of March, when Gandalf, upon whom no shadow fell, stood tall and with a great cry that soared above the reek and wrack of war declared that the realm of Sauron was ended. Afterwards, at the celebrations in Ithilien, a land of swift flowing waterfalls and of fragrant herbs, the garden of Gondor, in which the King was enthroned, the bard who knelt before him and begged leave to tell his lay and with his harp, now in the high elven tongue, then in the grey elven, and the tongues of Men, moved them all with sweet words. That is fair enough and very good literature (I hasten to add, not my version of it! See Book VI Chapter IV), but that Middle-earth, the οἰκουμένη, is a fallen world is brought home in the passage below, which I hope resonates with you as it did with me.

"Then Treebeard said farewell to each of them in turn, and he bowed three times slowly and with great reverence to Celeborn and Galadriel. 'It is long, long since we met by stock or by stone, A vanimar, vanimálion nostari!' he said. 'It is sad that we should meet only thus at the ending. For the world is changing: I feel it in the water, I feel it in the earth, and I smell it in the air. I do not think we shall meet again.'
And Celeborn said: 'I do not know, Eldest.' But Galadriel said: 'Not in Middle-earth, nor until the lands that lie under the wave are lifted up again. Then in the willow-meads of Tasarinan we may meet in the Spring. Farewell!'"

It's specifically this last part that I find to have a paschal quality because not only does it echo Treebeard's song as he strode through the woods of Fangorn with the hobbits in Book III but it also echoes Bombadil's words with which he dispelled the curse of the Barrow-wight in Book I:


Get out, you old Wight! Vanish in the sunlight!
Shrivel like the cold mist, like the winds go wailing,
Out into the barren lands far beyond the mountains!
Come never here again! Leave your barrow empty!
Lost and forgotten be, darker than the darkness,
Where gates stand for ever shut, till the world is mended.

"Till the world is mended..." These are the words that connect the two chapters. But also the words "where gates stand for ever shut," which calls to mind that beautiful Collect for Easter Day in the Book of Common Prayer:

ALMIGHTY God, who through thine only-begotten Son Jeſus Chriſt haſt overcome death, and opened unto us the gate of everlaſting life: We humbly beſeech thee, that as by thy ſpecial grace preventing us, thou doſt put into our minds good deſires; ſo by thy continual help we may bring the ſame to good effeƈt, through Jeſus Chriſt our LORD, who liveth and reigneth with thee and the Holy Ghoſt, ever, one God, world without end. Amen.

These have a vernal quality, even as Galadriel speaks of a new Spring. Tasarinan, significant in being the place of refuge to which the exiles of Gondolin, fairest of cities, came in antient times, was in Beleriand which was destroyed in the War of Wrath and the Change of the World and lies now under the sea (cf. Isaiah 40:3). But thither they may meet in the Spring when the gates of everlasting life are thrust open and the world is mended. It is about anticipation and keeping vigil. As I have said, Middle-earth is a fallen world. Galadriel herself alludes to this in Book II when she says that Spring and Summer have gone forever by. We too are fallen and look both backwards to Paradise, to the Spring before the blight of sin came and forward to the same, turning ever thitherward in prayer, to eternity when our sin is taken up and transformed by the inscrutable mercy of God. Not for naught do we celebrate Easter in the Spring! For Spring is the season of life when the world is refreshed and the winter of death is driven out. What better time to reflect upon the nature of salvation, in which even a man like me, born in 1988, can look with the eyes of truth over the years from the foundation of the world and forth to eternity in the knowledge that God is merciful and compassionate.

Let us join then with St Paul in saying that Christ our passover is sacrificed for us: Therefore let us keep the feast, not with old leaven, neither with the leaven of malice and wickedness; but with the unleavened bread of sincerity and truth. Alleluia, Alleluia! Glory to thee, O LORD! Alleluia, Alleluia, glory to thee!

I wish all my readers every temporal and spiritual blessing for Easter! Alleluia, Alleluia, Alleluia!
Posted by Patrick Sheridan at 8:00 am
Email ThisBlogThis!Share to TwitterShare to FacebookShare to Pinterest