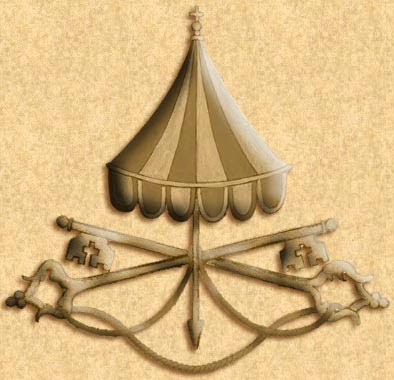 Is there anyone more full of shite than a Sedevacantist? See this site for a good laugh. According to them Pius XII was the last ''true'' Pope and they celebrate the Tridentine Rite, and that if you do not adopt the sedevacantist position (like so many in the SSPX, with whom I desire no communion - ever) you don't really care much for Tradition. The dead give away of their manifest heresy is this line (no doubt inspired by Mediator Dei): ''What we believe, so we pray.'' Their priests even swear Pius X's Oath against Modernity!

Boob. As far as ''true'' Popes go Pius XII was the absolute worst in the history of the Papacy (even worse than John XII, who funded his far too numerous mistresses at the Lateran by the sale of episcopal consecrations). A thousand anathemas upon that awful, heretical, man. And now the ''Tridentine Rite''...To my knowledge the so-called ''Tridentine Rite'' has not been celebrated since 1604 when Clement VIII introduced his new reformed Missal (and I think that the ''ethos'' of the Tridentine Rite died a death when Gregory XIII imposed the Gregorian Kalendar on the Universal Church in 1582). No doubt these ignorant extremists celebrate the '62 Rite merrily, woefully ignorant (or wilfully so) of the fact that the '62 Rite is as far removed from any holistic and authentic hermeneutic of Tradition as is the rest of their deplorable position. But it was before the Council so it's all ok; it's Vatican II which is the enemy of Tradition, not Pius XII! If the See of Peter is vacant then the Church of Christ is builded upon sand. But then some have even gone so far as to elect their own popes. Idiots.

According to their logic because I am not a Sedevacantist I can't possibly care much for Tradition. Well I hope they'll forgive me if my understanding and appreciation of Tradition goes back farther than the 1950s. Also I prefer communion of the Church to schism for its own sake. If the Church is the guardian of Tradition then methinks it is worthy to trust more to the Church than my own finite self in this matter (please do not misunderstand me here: when I poke at the Church for departing from Tradition it is usually individuals I have in mind - Pius XII and Pius X being prominent among them, who because of their exalted positions exerted vast and lasting influence).

See here for another Sedevacantist site, with a nice image of the Sacred Heart to welcome you. Under their Liturgy section no mention whatever is made of the Divine Office but they have no qualms about listing the Rosary (or including a Confiteor before Holy Communion during ''the Latin Mass''). If I would thank Vatican II for anything (and I welcome many of the changes instigated by that Council most Traditionalists blanch at) it would be the schism of these ignorant extremists.

Since Sedevacantists aren't remotely traditional, what are they? Are they merely ignorant or insincere?
Posted by Patrick Sheridan at 11:55 pm
Email ThisBlogThis!Share to TwitterShare to FacebookShare to Pinterest