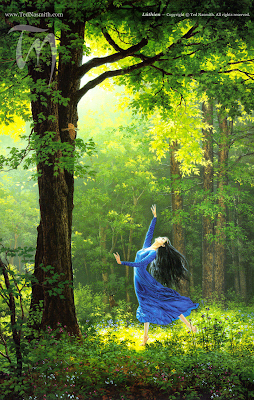 One of the most personal, evocative and certainly among the oldest moments at the heart of Tolkien's legendarium is the vision of Beren, wayworn and bereft, in the woods of Doriath when he chanced upon the Elf maid Lúthien, dancing among the hemlocks at a time of evening under moonrise. I expect that most of you know ''hemlock'' as the poisonous weed which caused the death of Socrates, but to Tolkien, whose mastery of the English language was surpassed by none in his life, the word was generic, with roots in regional English. As the Oxford English Dictionary explains, the name is ''also applied in rural use to the large Umbelliferae generally,'' that is, to any of various plants whose flowers and seeds are borne upon delicate, many-branched umbels. These are familiar plants of English woodlands, but their modern common names are less apt to Tolkien's purpose. The mention of ''Queen Anne's lace'' would seem out of place in a tale of the Elves, and for Lúthien to dance among ''cow's parsley'' would conjur an image of a rustic milkmaid, not an Elven princess. According to Christopher Tolkien, the greatest of all Tolkien scholars, Tolkien did not sympathize with the botanists' habit of applying distinct English names to more or less similar plants which popular usage made little attempt to distinguish (cf: J. Garth, Tolkien and the Great War). This appreciation of old and rural plant distinctions is seen also in the use of the terms Gladden and Nasturtian.

There are so many layers to Tolkien's legendarium. I daresay that not one of the many thousands of words went unconsidered. I wonder if this much attention was lavished upon the works of lesser authors?