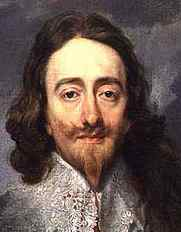 Better late than never, as the saying goes. At any rate I was at work all day yesterday and rather under the weather when I got home. Catholic England has (or had) Apostolic Succession and Monarchy at her heart; St Charles the Martyr (one of the patron saints of Liturgiae Causa - a truly ecumenical 'blog) was martyred for the preservation of these things. One only needs to look at what happened to these Isles (I don't say ''British Isles'') under the ugly despot Oliver Cromwell to see that without Monarchy, bad things happen. That isn't to say that there aren't bad Monarchs, but King John and our Sovereign Queen Elizabeth II are not the same person, are they? Monarchy is intrinsically good and Christian. Republics are not. It is no coincidence that δημοκρατία meant something like ''mob rule'' to the Greeks. Anyone who disagrees with me in this matter scarcely deserves the name Catholic.
Great Charles his double misery was this,
Unfaithful friends, ignoble enemies;
Had any heathen been this prince's foe,
He would have wept to see him injured so.
(Katherine Philips, Upon the Double Murder of King Charles, 1667).

I wonder why Rome didn't name St Charles patron of their English Ordinariate?
Posted by Patrick Sheridan at 5:04 pm
Email ThisBlogThis!Share to TwitterShare to FacebookShare to Pinterest