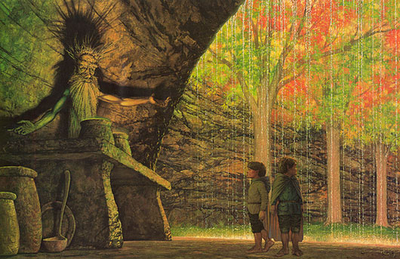 I have lost all interest in religion lately, and especially that propounded to us in most 'blogs. However Fr Chadwick has started a new 'blog, dedicated to the Sarum Use and other Northern liturgical patrimony - a supreme contribution to England, and the memory of which (and practice thereof, in isolated places of orthopraxis) is a remnant of our truly Christian past. It reminds me of the relationship of the Ents to the Elves, and how they became estranged. The Elves had taught the Ents to speak far back in the deeps of time, and the Ents cannot forget it; but the two kindreds had grown far apart as the Ages of the Sun went by, and all about the lands the influence of Sauron grew, and dark things crept back into the Wild.

Historia is a magnificent lady, much like Natura, especially when she narrates to us the story of churches, laden with so much regret, showing up the various grotesqueries of human nature for us all to see, in all frankness. I think this is why Tolkien appeals to me so much - for historical reasons. Fair enough, it's all legendary, but he doesn't beat about the bush. Bad things happen, ends come, people die, many fair things that might have come to everlasting fruition perish from this world. So it is with the Church, and the churches. Much that once was is lost, for none now live who remember it. Or as Galadriel said of the Springtime of Lothlórien, that it ''will never be seen again, save in memory.'' Perhaps the more venerable liturgical customs of England, now entirely obsolete (except in such places as Westminster Abbey, where they are watered down and mingled with such things as priestesses), are that much dearer because we know nothing else? Tolkien said once that the beauty of the Eldar was enriched by sorrow and wisdom, and even to Melkor was it said: ''And thou, Melkor, shalt see that no theme may be played that hath not its uttermost source in me, nor can any alter the music in my despite. For he that attempteth this shall prove but mine instrument in the devising of things more wonderful, which he himself hath not imagined.''

What am I trying to say, exactly? That we ought to be content with things as they are? Presently I haven't a hope left in the world. I am no longer interested in even being right, let alone doing right. Religion just fills me with wrath. Finis.

Do go over and pay a visit to Fr Chadwick's new 'blog. Actually he is desirous of articles by others who have an interest in the matter of Sarum and all that, so do let him know. I would ask also that you pray God for his health, since he is recovering from a hernia operation. Jesu mercy, Mary pray!