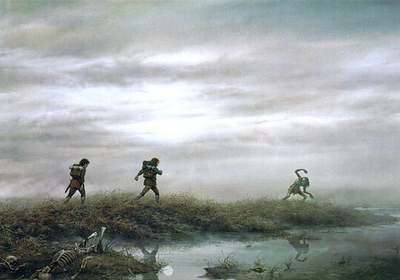 ''Its name was Cirith Ungol, a name of dreadful rumour. Aragorn could perhaps have told them that name and its significance; Gandalf would have warned them. But they were alone, and Aragorn was far away, and Gandalf stood amid the ruin of Isengard and strove with Saruman, delayed by treason. Yet even as he spoke his last words to Saruman, and the palantír crashed in fire upon the steps of Orthanc, his thought was ever upon Frodo and Samwise, over the long leagues his mind sought for them in hope and pity.'' (The Lord of the Rings, Book IV, Chapter III).