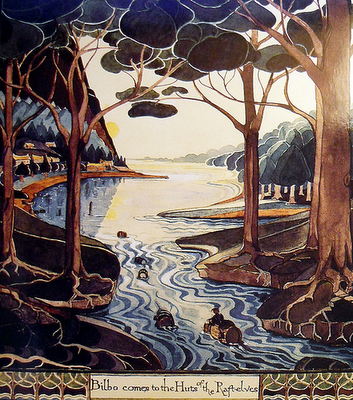 On the Octave day of St John the Evangelist, in the year of Grace 1892, John Ronald Reuel Tolkien was born in Bloemfontein, South Africa. He is 120 years old today! He hasn't quite beat the Old Took yet, but there we are! Incidentally, 2012 will also mark the 75th anniversary of the publication of The Hobbit. Abebooks have a first edition, first impression, hard-back copy of The Hobbit signed by Tolkien himself, in very fine condition. It's only £9500. It would make a very nice birthday present!

The painting is, of course, by Tolkien himself, depicting Bilbo's travail on the Forest River after his escape from the Elven-king's halls in northern Mirkwood. I imagine that Tolkien and Bilbo were very much alike. At any rate The Red Book of Westmarch is the legendarium, preserved in Gondor and the Shire after Bilbo passed into the West.
Posted by Patrick Sheridan at 12:22 pm
Email ThisBlogThis!Share to TwitterShare to FacebookShare to Pinterest