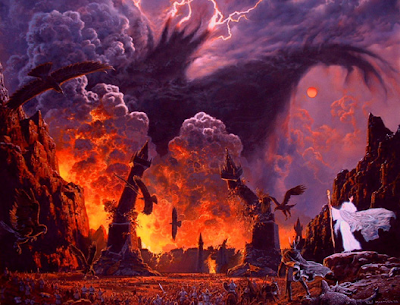 ''But in Gondor the New Year will always now begin upon the twenty-fifth of March when Sauron fell, and when you were brought out of the fire to the King.'' (J.R.R Tolkien, The Lord of the Rings, Book VI, Chapter IV).

Tolkien was a Catholic and a mediaevalist. The Saxons believed, as indeed it was held in ancient tradition throughout mediaeval Europe, that Lady Day, the 25th March, was the actual date of our Lord's Crucifixion, and the last day of Creation. All of this is asserted in Byrhtferth's Manual, written by Byrhtferth, a monk of Ramsey, c. A.D 970-c.1020. Until the adoption of the Gregorian Kalendar in 1752, the 25th March was the beginning of the new year for most legal and official purposes in England. The Fellowship of the Ring departed from Rivendell on 25th December, and the realm of Sauron was ended on the 25th March. I think he was trying to tell us all something.

You see, it isn't just moral lessons to be learned from The Lord of the Rings - for those who have eyes to see.