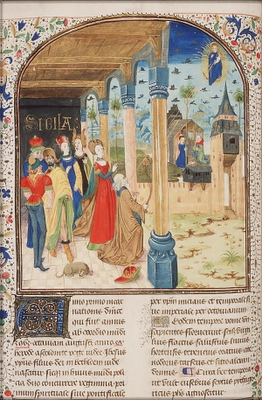 I have often wondered to whom Thomas of Celano referred with these staves, and why the Sybil ranks alongside King David in import to him. Does he mean the Cumaean Sybil, who foretold (according to a reading of Virgil's Fourth Eclogue) the coming of the Saviour? (My old Latin teacher, herself a practicing Roman Catholic, told me of this many years ago, and told me to reject such reading as revisionist and fanciful). However, he may have been familiar with the so-called Sibilline Oracles which were a set of Christian writings imitating the pagan Sibillline Books. It's interesting nonetheless, that something so familiar should go unnoticed by hosts of people who go to Masses of the Dead.

In ancient days, in temples and caves, there dwelt wise women, the legendary seeresses of antiquity, who lived under the influence of the gods, and to whom men came from far and wide for counsel and prophecy. We call these women Sibyls, from the Greek σίβυλλα which means ''prophetess.'' One such Sibyl dwelt at the ancient Etruscan town of Tibur (modern day Tivoli), about fifteen miles north east of Rome. Her temple (which still stands to this day) stood in the midst of a sacred grove, the streams of which flowed out into the Tiber.

Augustus Caesar met with the Tiburtine Sibyl on the very afternoon of our Lord's Nativity. The story is to be found in Jacobus de Voragine's 13th century Golden Legend, and goes:

''...here is what Pope Innocent III tells us: in order to reward Octavian for having established peace in the world, the Senate wished to pay him the honours of a god. But the wise Emperor, knowing that he was mortal, was unwilling to assume the title of immortal before he had asked the Sibyl whether the world would some day see the birth of a greater man than he.

Now on the day of the Nativity the Sibyl was alone with the emperor, when at high noon, she saw a golden ring appear around the sun. In the middle of the circle stood a Virgin, of wondrous beauty, holding a Child upon her bosom. The Sibyl showed this wonder to Caesar; and a voice was heard which said: "This woman is the Ara Cæli!"

And the Sibyl said to him: "This Child will be greater than thou."

Thus the room where this miracle took place was consecrated to the Holy Virgin; and upon the site the church of Santa Maria in Ara Coeli stands today. However, other historians recount the same event in a slightly different way. According to them, Augustus mounted the Capitol, and asked the gods to make known to him who would reign after him; and he heard a voice saying: "A heavenly Child, the Son of the living God, born of a spotless Virgin!" Whereupon Augustus erected the altar beneath which he placed the inscription: ''This is the altar of the Son of the living God.''
Posted by Patrick Sheridan at 6:00 pm
Email ThisBlogThis!Share to TwitterShare to FacebookShare to Pinterest