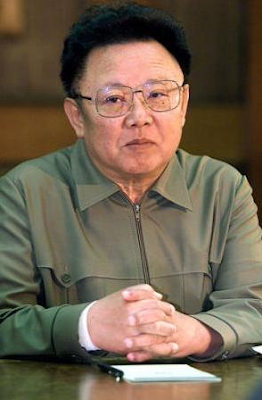 Kim Jong Il has died, apparently of ''fatigue'' (according to the broadcast I saw on BBC Asia at 5 o'clock this morning). The words of Gandalf spring to mind: ''a great evil has departed.'' I don't know about you, but I won't be praying for his soul. The man was despicable; he held his people in dire thralldom and want, murdered whole families because of a dissenting member, and had innocent Christians put cruelly to death. May he feel the full force of Divine Justice.

I wonder what ramifications his death will have for future politics in North Korea? The news put me in mind of Winston Smith's discourse on the ''spirit of man'' during his time with O'Brian in the Ministry of Love, that you cannot build a civilisation upon lies, grotesqueries and the intoxication of power. Do pray for the people of North Korea.
Posted by Patrick Sheridan at 3:57 pm
Email ThisBlogThis!Share to TwitterShare to FacebookShare to Pinterest