Master of Doom, by doom mastered... 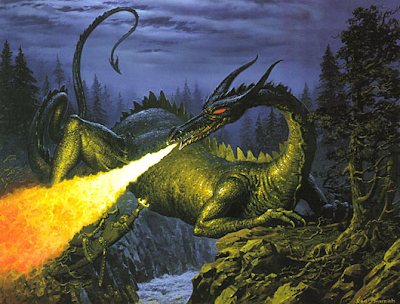 Then abiding until a very vital and unfended spot was within stroke, he heaved up Gurtholfin his black sword and stabbed with all his strength above his head, and that magic blade of the Rodothlim [Gnomes] went into the vitals of the dragon even to the hilt, and the yell of his death-pain rent the woods and all that heard it were aghast.

Then did that drake writhe horribly and the huge spires of his contortions were terrible to see, and all the trees he brake that stood nigh to the place of his agony. Almost had he crossed the chasm when Gurtholfin pierced him, and now he cast himself upon its farther bank and laid all waste about him, and lashed and coiled and made a yelling and a bellowing such that the stoutest blenched and turned to flee. Now those afar thought that this was the fearsome noise of battle betwixt the seven, Turambar and his comrades, and little they hoped ever to see any of them return, and Níniel's heart died within her at the sounds; but below in the ravine those three caverns who had watched Turambar from afar fled now in terror back towards the fall, and Turambar clung nigh to the lip of the chasm white and trembling, for he was spent.

At length did those noises of horror cease, and there arose a great smoking, for Glomund was dying. Then in utter hardihood did Turambar creep out alone from his hiding, for in the agony of the Foalókë his sword was dragged from his hand ere he might withdraw it, and he cherished Gurtholfin beyond all his possessions, for all things died, or man or beast, whom once its edges bit. Now Turambar saw where the dragon lay, and he was stretched out stiff upon his side, and Gurtholfin stood yet in his belly; but he breathed still. (J.R.R Tolkien, The History of Middle-earth, Volume II, Chapter II).