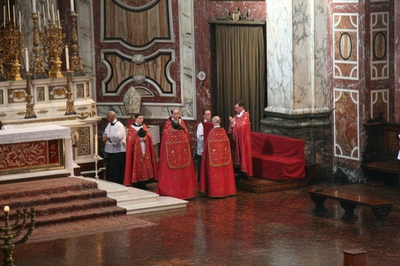 It is often claimed that the London Oratory is a centre of ''liturgical excellence.'' I wonder what standard they who make this claim use to measure ''liturgical excellence.'' Clearly not Tradition, so what? I venture to think that the most famous ''liturgical'' people out there who make such judgements really don't know what they're doing, or if they do they just wish to perpetuate a myth and keep innocent, less-informed Christians in the dark - a bit like keeping up with the Joneses, or a sycophants' club where they all compliment each other on how traditional and Ultramontane they all are. The feast of St Andrew had, of old, an Octave in this land, and having half an hour to spare, I decided to listen to the BBC Radio 3 live broadcast of choral Vespers from the Oratory for Andrewmas. I think that the incorrect psalmody, the mediocre choir, and the presence of elements from the New Rite would shew this place up as being by no means a centre of ''liturgical excellence'' (a claim made by a moderator of The New Liturgical Movement 'blog, by the way). Why Psalm 117 in place of Psalm 138? Vicar's choice, perhaps? Psalm 117 is much shorter than Psalm 138. Maybe it was so that we could have a polyphonic psalm. If this was the reason then all I can say is that the Sacred Liturgy cannot be cheapened like that.
Posted by Patrick Sheridan at 11:18 pm
Email ThisBlogThis!Share to TwitterShare to FacebookShare to Pinterest