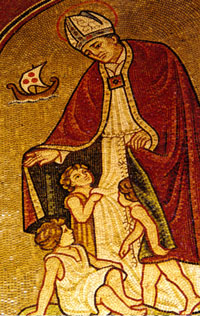 A very happy Christmas! I suppose you will be hanging up your stocking just once more: I hope so for I have still a few little things for you. After this I shall have to say, ''goodbye,'' more or less: I mean, I shall not forget you. We always keep the old numbers of our friends, and their letters; and later on we hope to come back when they are grown up and have houses of their own and children.

My messengers tell me that people call it ''grim'' this year. I think they mean miserable: and so it is, I fear, in very many places where I was specially fond of going; but I am very glad to hear that you are still not really miserable. Don't be! I am still very much alive, and shall come back again soon, as merry as ever. There has been no damage in my country; and though my stocks are running rather low I hope soon to put that right.

sends a special message to you: love and a hug! He says: do ask if she still has a bear called Silly Billy, or something like that; or is he worn out?

Give my love to the others: John and Michael and Christopher - and of course to all your pets that you used to tell me about. Polar Bear and all the Cubs are very well. They have really been very good this year and have hardly had time to get into any mischief.

I hope you will find most of the things that you wanted and I am very sorry that I have no 'Cats' Tongues' left. But I have sent nearly all the books you asked for. I hope your stocking will seem full!

I know we have a long way to go before Christmas, so purists out there (confessedly like me) who despise the whole ''festive season'' thing which only mocks and cheapens the Advent and Christmas seasons have naught to fear from me. Within this great Octave of St Andrew the Apostle, called first among the Disciples, we celebrate the feast of St Nicholas, the ''real'' Fr Christmas, and the patron saint of children. Many miracles are attributed to him, and many legends arose around his cult, such as you can find in the letter from Fr Christmas to Priscilla Tolkien when she was a girl. Why do we lie to our children, though? Why do we have them believe in a benevolent, fat old man in a red cloak who dives down chimneys and leaves gifts under the Christmas tree? Do these things have much to do with the historical St Nicholas, Wonderworker, who punched the heretic Arius in the face during the ''there was when he was not'' debate at the Council of Nicaea? Certainly my father told me about St Nicholas, that he was a bishop in Asia Minor in ancient days, but I seldom thought of the jolly fat man and the saint in the same light. To what extent are they akin? At least my upbringing was ''culturally'' Roman Catholic, augmented by my pious Roman Catholic grandparents, and balanced by influence from my protestant grandmother (even now I am averse to kissing things like relics and images); how is it with godless children? When they grow old enough and start families of their own, why do they continue what seems to me to be a custom with little meaning? What use are irreligious fairy tales to children with no faith?

Whatever betide, I still enjoy some of the legends surrounding St Nicholas, many of which are as old as the hills. I am even mindful of them when I say my prayers to him. If you have children, Letters from Father Christmas by J.R.R Tolkien would be a nice Christmas present (in my opinion). The Good Little Christmas Tree by Ursula Moray Williams also, with handsome illustrations by Gillian Tyler; one of my favourite books as a child. The little I know of Ursula Moray Williams is good; like Tolkien she was a Catholic, and her book is influenced by the faith of our fathers for those who have eyes to see. It is out of print unfortunately, but you can still find it on Amazon.
Posted by Patrick Sheridan at 4:27 pm
Email ThisBlogThis!Share to TwitterShare to FacebookShare to Pinterest