From the Annals of Aman... 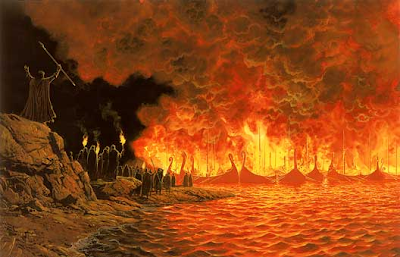 This passage from The History of Middle-earth I find so resonant. Does it remind you of anything?

And it is said that Melkor was not seen again for a while; but suddenly he appeared before the doors of the house of Finwë and Fëanor at Formenos, and sought to speak with them. And he said to them: ''Behold the truth of all that I have spoken, and how you are indeed banished unjustly. And think not that the Silmarils lie safe in any treasury within the realm of the gods. But if the heart of Fëanor is yet free and bold as his words were in Túna, then I will aid you, and bring you far from this narrow land. For am I not Vala as are they? Yea, and more than they, and have ever been a friend to the Noldor, most skilled and valiant of all the folk of Arda.''

Then the heart of Fëanor was increased in bitterness and filled with fear for the Silmarils, and in that mood he endured. But Melkor's words touched too deep, and awoke a fire more fierce than he intended; and Fëanor looked upon him with blazing eyes, and lo! he saw through the semblance of Melkor and pierced the cloaks of his mind, perceiving there the lust for the Silmarils. Then hate overcame all fear and he cursed Melkor and bade him begone. ''Get thee from my gate, thou gangrel, jail-crow of Mandos,'' said he, and he shut the doors of his house in the face of the mightiest of all the dwellers in Eä.

And at that time, being himself in peril, Melkor departed, consumed with wrath, and bitter vengeance he plotted for his shame. (The History of Middle-earth, Volume X).
The account in The Silmarillion is different, and in a few literary respects superior, but given the choice I always look to The History of Middle-earth.
Art: Ted Nasmith. And said Fëanor, ''let the ships burn!''
Posted by Patrick Sheridan at 10:31 pm
Email ThisBlogThis!Share to TwitterShare to FacebookShare to Pinterest