The Octave of the Lord's Epiphany... 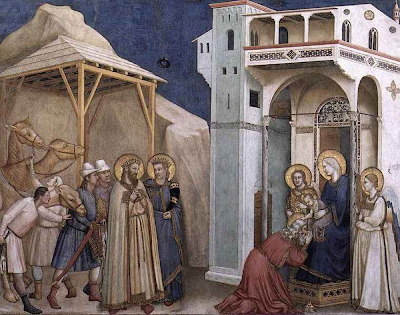 One of the more reprehensible of the 1955 reforms was the abolition of the Octave of the Epiphany. It seems strange that the Christmass Octave should be retained (not that those of the comites Christi were kept) instead of that of Epiphany; for Christmass is celebrated within the context of the Lord's manifestation to the world, not vice versa, and the Octave of the Epiphany (indeed the feast itself) was far older. Traditionally the Octave Day of the Epiphany marked the Baptism of the Lord, by which He fulfilled all righteousness. But what went through the mind of old Pius when he took it upon himself to break so venerable a tradition upon his will? Whatever the reasons, and I'm sure they fall short of truly justifying anything, I rejoice that there are pockets of orthopraxis out there who have escaped from his shadow. Truly, I mean. I have no time for those Ultramontane types who pay lip service to Tradition, and deserve the words: This people honours me with its lips; but its heart is far from me. (Is. XXIX, 13). The right celebration of Liturgy is a moral activity, and your soul is compromised if, on the Day of Judgement, the only reason you can come up with for acting contrary to the Tradition of the Church is: ''because the pope decided otherwise.''

So observe the Lord's Octaves (especially local ones), keep his fasts and feasts on their proper, traditional days, and you can't go wrong. Do otherwise and things might very well go ill with you on the Day of Judgement.
Posted by Patrick Sheridan at 1:44 pm
Email ThisBlogThis!Share to TwitterShare to FacebookShare to Pinterest