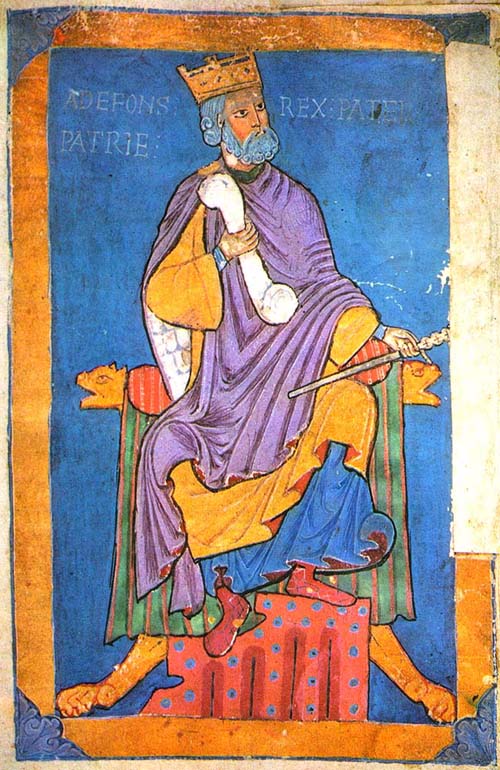 The New Liturgical Movement has reported that Mozarabic liturgy is to be celebrated in the Pagan Archbasilica of the Vatican on 16th May by the Archbishop of Toledo. That presents an interesting historical anomaly. Skipping lightly over whether the music or the rite itself will be authentically Mozarabic, just think what pope Hildebrand would have thought! He despised the Mozarabic Rite and called it "the Toledan superstition." Why? Who can say? Probably because it differed in many important ways from the abridged (hence "breviary") liturgy he himself celebrated and it was the nature of this megalomaniac to think that whoever thought, worshipped, and acted in any way contrary to the way he thought, worshipped and acted was a heretic. The Mozarabic liturgical books had been approved in Rome in 1065 but this clearly wasn't enough for Hildebrand, the driving force of whose pontificate was absolute uniformity and centralization and the acknowledgement of his temporal (or at least feudal) authority. And so he attempted to have the Mozarabic liturgy abolished by pressuring the Hispanic lords and sending his Romanising Cluniac monks over the Pyrenees. Alfonso VI of Castile, whom to-day we might call European, perceived that attempts by the reformers to supplant the venerable Mozarabic liturgy were met with popular resistance and so he put the matter to trial by combat, pitting Roman and Mozarabic champions against each other. The Roman champion was defeated and this was clearly not to the king's liking and so he caused a great fire to be kindled in Burgos, and declared that whichever of the Roman or Mozarabic books thrown into the fire and was unscathed, that rite would be accepted. According to legend, the Roman missal smouldered whereas the Mozarabic missal flew out of the fire unharmed. Then wrath mastered the king and he kicked the Mozarabic missal back into the fire, saying: "Let the horns of the laws bend to the will of kings!"

Clearly God favoured the Mozarabic Rite! However, Alfonso VI appealed to Hildebrand who was determined to impose the Roman Rite and so he sent his legate Cardinal Ricardo to Castile where at the Synod of Burgos in 1080 the Roman Rite was enforced throughout León and Castile and the Mozarabic Rite solely restricted to Toledo. I don't know how this was achieved but I expect it was by force of arms. Such was the organic development of the Roman Rite in Spain. It's interesting to compare the contemporaneous ecclesiastical reforms of Lanfranc in England and the later Norman Conquest of Ireland but which most history books would pass over as insignificant "reforms of the church." Or, going back to Charlemagne's time, compare the suppression of the various Gallican uses in his zeal for Romanitas. Or, nearer to Rome, the riots in Milan in 1442 when Eugenius IV launched an abortive attempt to impose the Roman Rite on the Milanese. But the suppression of the Mozarabic Rite in Spain exemplified a tendency, accelerated by the Council of Trent four hundred years later, of centralization and uniformity, all under the aegis of the Papacy. It is intolerant, arrogant and stupidly wrong to suppose that just because a rite has not its uttermost origins in the pope's chapel it is of its very nature heretical, suspect and in need of reform. But such has been, for the most part, the history of the popes and their relationship with the native uses and rites of the West. And the irony is that the old rites and the old uses of the West contain many antient features that have been lost in the Roman Rite. Mozarabic vespers, for example, contains an obvious allusion to the old Lucernarium in the preces, even so:

Just imagine being in attendance as the lamps were lighting. It would certainly call to mind Egeria's experiences in the Holy Land. But no! This is Toledan superstition!

I wonder what pope Francis thinks of this Toledan Archbishop celebrating Adoptionist, reformed liturgy in his church?
Posted by Patrick Sheridan at 12:51 pm
Email ThisBlogThis!Share to TwitterShare to FacebookShare to Pinterest