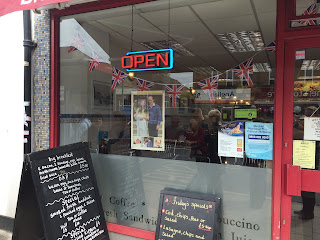 First of all, it was a pleasant reminder amidst a very unpleasant, unlooked for election result to see this in the window of Nick's cafe in my home town. I should have done so sooner but I rejoice with the Royal Family and the United Kingdom of Great Britain and Ireland and all the Commonwealth at the birth of Her Royal Highness Princess Charlotte of Cambridge and wish her every temporal and spiritual blessing in the LORD for a long life in blessedness and service to the nation. Sincerest congratulations indeed to the Duke and Duchess of Cambridge on a successful delivery of a beautiful baby girl. I went to Marks & Spencers and bought a commemorative tin of shortbread too, which I am delighted to see was on sale (have Tescos done anything, do you think?). I have no doubt the tin will come in handy for storage of the various mathoms I cannot bear to be without. 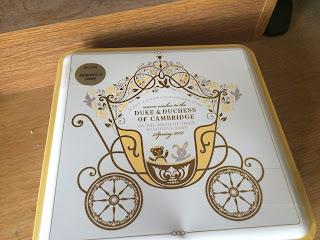 As for the election, Mr Hitchens has written a very apposite summation here. I have to say I was astounded at the result. I was expecting the Liberal Democrats to do badly, and I daresay I am not sorry to see some of them go (Vince Cable, for example), but the success of the Scottish National Party at the expense of Labour and the fact that the Conservatives have now scraped a majority in the House of Commons is a very unfortunate turn of events. Like Mr Hitchens, I was expecting and indeed hoping for a broader political spectrum than what we now have on the basis of which a truly politically conservative party or movement might take shape and bring about change for the better. We were both wrong. Of course, now that the Lib Dems are no longer in coalition with the Tories there is no scapegoat for that awful fake Mr Cameron on which he can heap the opprobrium for his relentless pursuit of liberal, politically correct ideals. Perhaps that's a good thing? And the electorate, a constitutional necessity, think that the Conservatives represent political conservatism! The fact is, none of them care what you think. As Mr Hitchens says:

"The truth is that both major parties are now just commercial organisations, who raise money wherever they can get it to buy their way into office through unscrupulous election campaigns. They then presumably reward their donors once they are in office. The electorate are a constitutional necessity for this process, but otherwise their fears, hopes and desires are largely irrelevant. They are to be fooled and distracted with scares ('The other lot will privatise the NHS!' 'The other lot will nationalise your children’s toys and then wreck the economy!') or with loss-leader cut-rate offers, like supermarkets ('Vote for us and get a cheap mortgage!' 'Vote for us and have your rent frozen!'). Even if these wild pledges are implemented, the customer will pay for them through higher taxes elsewhere, just as with supermarket loss-leaders.

"By playing our part in this ludicrous pantomime, we license it to continue forever.  I have thought for years that the key to ending it was simple and obvious.  We could revenge ourselves on these fakes by refusing to vote for them. The arrival of new parties, UKIP on one side, the Greens on the other, made such a revolt and redemption even easier.

"But I must now admit that the people of this country actually seem to prefer to live the same experience over and over again, and seem astonishingly ready to believe the crudest propaganda."

I couldn't have put it better myself. It is essentially why I don't vote. My mother came home from work to have lunch with my father to-day and watch the news updates. She is of the opinion that voting should be compulsory and seems to think that if it were a radical difference for the better might be realised. Voting is compulsory in North Korea, unless I'm quite mistaken, so that is a mickey mouse argument. It's obvious that the Conservative victory is due to the fear created by their monstrous engines of propaganda of a Labour-SNP coalition and the ramifications for the Union and the stupid electorate fell for it. Well, I want no part of this travesty of government. It's enough to dash all faith in the efficacy and rightness of our system. Let us not forget that democracy comes from the Greek for mob rule. What do we do? Do we retire to monasteries and speak nothing but Latin and Old English? Or do we emigrate?


For those of you who think that Conservative means moral conservatism, watch this video. Inclusion, diversity, and blah, blah. Mr Cameron is a wet brown paper bag of a man. He doesn't believe in anything! And this fake is now our Prime Minister!

Oh well, Her Majesty has asked him to form a government. Let's see what the next few weeks has in store. I have no doubt that we're in for another five years of hollow tedium.
Posted by Patrick Sheridan at 5:45 pm
Email ThisBlogThis!Share to TwitterShare to FacebookShare to Pinterest